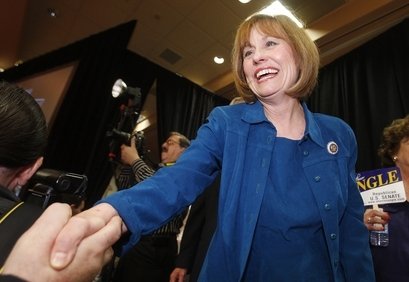 As Greg Sargent over at The Washington Post‘s Plum Line reported this week, when an interviewer suggested in 2009 suggested that there were “domestic enemies” in the US Congress, Nevada conservative Sharron Angle responded, “Yes. I think you’re right.” Now, that alone is quite an inflammatory statement, claiming elected lawmakers here in DC are actively threatening the safety of this country.

Well, as ThinkProgress points out today, Angle was given a second chance to weigh in on this domestic-enemies-in-Congress claim in an interview with conservative radio host Heidi Harris. Here’s the exchange:

HEIDI HARRIS: He said that we have domestic enemies and he thinks some of them are in the walls of the Senate and Congress, and you agreed with him. Did you agree with him?

ANGLE: Well, we were talking about what’s going on in Congress, of course, and the policies that have come out of Congress, and those policies as we’ve all seen over the last 18 months have definitely hurt our country.

HARRIS: Yeah, well I agree with you by the way, but I wanted to make sure you got you a chance to clarify that, because I’ll tell you the truth, Sharron. I do think we actually do have folks in Congress who truly want to do us harm and see us change from the nation we are now.

ANGLE: There is no doubt that the policies that have been coming out in the last 18 months have injured us, and injured us most specifically here in Nevada.

So not only does Angle stand by her domestic enemies position, but she belives the problem is actually spreading! Harris, the transcript shows, agrees with Angle’s position.

In response to Angle’s original comment, Senate Majority Leader Harry Reid, Angle’s opponent in Nevada’s US Senate race, issued a direct challenge to Angle: Name which senators she considered domestic enemies. “If she is going to use such rhetoric, she has an obligation to name names and explain to the American people exactly who she thinks is a domestic enemy,” Reid said. Then again, you can’t take seriously most anything Angle has to say. After all, this is the candidate who called the unemployed “spoiled,” who suggested “Second Amendment” remedies to fix our problem in Congress, and stated that a teenage girl who’d been raped by her father should turn “a lemon situation into lemonade.”