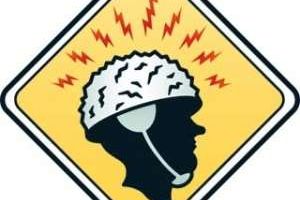 What kind of sick mind dreamt up the idea for “Telephone,” Lady Gaga’s 9-minute video potpourri of prison homoeroticism, shameless product placement, and incisive commentary on cell phone reception? A mind that’s been brainwashed by the CIA (Or Freemasons. Or Satanists. Or whatever nefarious organization has the capability to plot world domination and come up with a crazy idea like cigarette sunglasses.)—that’s who. Yes, it’s time for another installment of Conspiracy Watch, our ongoing collection of wonderfully weird (and totally whack) conspiracy theories.

THE CONSPIRACY: Behind the catchy singles and outrageous getups, Lady Gaga is the pawn in an elaborate Illuminati plot. Looking beyond the surface of her lyrics, videos, and fashion reveals a trove of secret messages and symbols promoting Freemasonry, satanic rituals, and CIA brainwashing. For example, her “Paparazzi” video is a metaphor for how “reeducation by the occult elite” can turn you into a killer robot. Instead of being a savvy image maven, Gaga may be unaware of what she’s doing, since her “robotic and slightly degenerate persona embodies all the ‘symptoms’ of a mind control victim.”

THE CONSPIRACY THEORIST: The anonymous keeper of the website Vigilant Citizen, an enthusiastic Canadian symbologist and music producer who has been exposing and analyzing the “transhumanist and police state agenda in pop music,” including the work of Beyoncé, Lil Wayne, and Rihanna. He confesses that he likes most of the music he deconstructs: “If people have to go through the trouble of incorporating hidden messages in songs, they will certainly pick sure hits, performed by charismatic artists. If those messages were in crappy songs, they would have no effect at all, rendering them useless.”

MEANWHILE, BACK ON EARTH: A superstar clotheshorse who is unwittingly the tool of an evil yet very silly conspiracy…wait, isn’t that the plot of Zoolander?