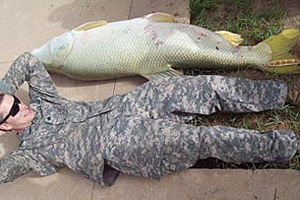 FOR SEVEN and a half years, US soldiers have been on a fishing expedition in Iraq: the hunt for the Saddam Bass.

Hundreds of the huge, carnivorous creatures swarm the moats of Baghdad’s Al Faw Palace, a sandstone citadel built by Saddam Hussein that now houses the US military HQ. The fish, which can grow to six feet and weigh more than 100 pounds, were supposedly cultivated by the dictator and his sons. A favorite base workers’ myth holds that the Husseins threw captives to the fishes, who in time developed a taste for human blood.

Today, the Saddam Bass feast on nothing nastier than chow-hall scraps, torment waterfowl, and dodge soldiers and contractors indulging in off-duty catch-and-release fishing. They even have a fan blog (thefishatalfawpalace.blogspot.com).

The fish, actually a rare variety of Tigris carp and other native freshwater species, have also been enlisted in reconstruction efforts. Many were shipped last year to a hatchery in Wasit province, where it’s hoped they’ll help restore wetlands and “revolutionize the fishing industry,” in the words of Col. Lyle Jackson, an Army veterinarian who oversaw the redeployment. “We can help the whole Iraqi economy with these fish,” he says.

Plenty of Saddam Bass still patrol the palace, mascots of sorts for the remaining troops, who will soon be coming home—or departing for Afghanistan, where they have bigger fish to fry.

For a rundown on what else the US leaves behind in its wake in Iraq, check out Mother Jones‘ slideshow on what we left behind, then join us on Facebook to post your own thoughts on the costs of the Iraq war.