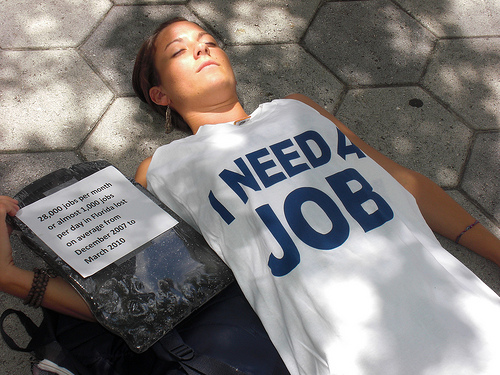 For the American labor force, Wednesday was a brutal day in the US Senate. You can thank the Republican Party for that. In the waning days of the Senate’s session, extensions of long-term unemployment insurance and an emergency fund subsidizing jobs around the country were blocked by GOP senators.

The unemployment insurance extension would’ve made it possible for jobless workers in states with high unemployment to collect 119 weeks of benefits. The current cut-off point is 99 weeks, the most in recent history. Sen. Debbie Stabenow (D-Mich.) had for months pushed to add another 20 weeks onto the available 99 in states with 7.5 percent unemployment or higher. Joining her in demanding more relief for jobless workers were the “99ers,” those out of work Americans who’ve exhausted all of their support funds and now have no safety net at all. But it was Sen. George LeMieux (R-Fl.) who stood in their way. LeMieux said Stabenow’s proposal would add to the country’s $13.5 trillion deficit and thus wasn’t feasible:

Stabenow countered by saying, “The reality for us in America is that we will never get out of debt with more than 15 million people out of work.” But the Michigan senator’s request for unanimous approval of the extension was rejected. And with Republicans, uninterested in more jobless benefits, sure to gain seats in the House and Senate this fall, if not win one or both chambers, we’ve likely seen the last of Stabenow’s proposal.

With the Temporary Assistance for Needy Families emergency fund—which supports job creation programs in various states—expiring on Thursday, Senate Democrats had also sought to prolong TANF’s emergency fund for three months. “This small program has had a huge impact in Illinois,” said Sen. Dick Durbin (D-Ill.), the Democratic Party whip. “Rather than paying people to do nothing, this program helps private companies hire the employees they need but can’t quite afford.” But this idea, too, was rejected, this time by Sen. Mike Enzi (R-Wyo.).

Enzi’s office told the Huffington Post’s Arthur Delaney that the Wyoming senator opposed the continuation of the fund because it was “not sound welfare policy, has not been considered by the Senate Finance Committee, is not bipartisan, and is costly, estimated to cost approximately $500 million for a one quarter extension reported.” A Democratic aide told HuffPo the TANF extension now looked to be “pretty much dead in the water.” The fund’s loss will certainly be felt: the left-leaning Center on Budget and Policy Priorities estimated the fund placed 240,000 unemployed Americans into jobs.