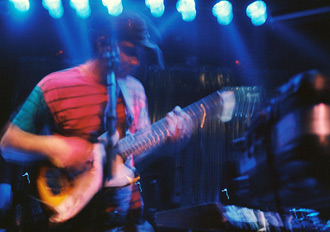 As a member of Animal Collective, one of those rare bands that define a sound (weirdo experimental psych-pop) rather than be tied to one, Avey Tare (a.k.a. David Portner) has produced some of the more compelling music to come out of the 21st century indie-rock hype machine. While Panda Bear, AC’s McCartney to Tare’s Lennon, has released well-received solo albums on par with the main band’s output, Tare has remained conspicuously quiet—until now. Down There, his solo debut the on Paw Tracks label, hit the streets on October 26. A decidedly melancholy affair, it seems to recount a dark journey through a mind troubled by place and circumstance. It’s a bold move for a man at the critical and popular pinnacle of his career; in other words, just another unexpected and mind-bending release from a member of the Animal Collective family. I hit up Tare for the lowdown on his own listening habits.

Mother Jones: What’s your favorite new release and why?

Avey Tare: Teengirl Fantasy’s 7am. I’ve been digging the EPs these two dudes have put out in the past year or so online. Home brewed house.

MJ: How about for a release totally outside your genre?

AT: Bill Evans Trio, Sunday at the Village Vanguard

AT: In a very good way: “You Can Count On,” by Panda Bear

AT: Billy Joel, “Scenes From an Italian Restaurant”

AT: Soundtrack for Mr. Magoo’s A Christmas Carol

MJ: You recorded Down There in a converted church. What’s the weirdest place you’ve recorded?

AT: I think Tucson, Arizona, is the strangest place I’ve ever recorded music. Animal Collective recorded all of its record Strawberry Jam there.

AT: Otters. Don’t have one.