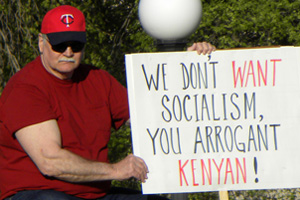 What happens to the tea party now?

There’s been lots of speculation about what the tea party movement will do after the midterm elections. Not only have tea party activists been busy plotting their next move, they’ve already revealed much of their plan. It looks something like this: Raise money, have more tea parties, and join the permanent political class. It’s a far cry from a movement that has emphasized its insurgent organizing structure and disdain for politics as usual.

The Tea Party Patriots, one of the largest and most successful national tea party groups, which claims to represent more than 2,800 local organizations, is already focusing on ingratiating itself to the incoming Congress. TPP laid out much of its future intentions in a fundraising memo that was leaked to archrival and California talk show host Mark Williams in October. The document outlines the group’s 40-year vision for world dominion, so to speak. The first steps are simple.

According to the memo and subsequent emails to members, TPP will host a “freshman orientation” for incoming members of Congress (many of whom will be getting congratulatory phone calls from tea partiers at the urging of TPP’s leadership). It’s the tea partiers’ attempt to ensure that their newly elected members aren’t unduly influenced by the likes of former Senate majority leader-turned-lobbyist Trent Lott, who has said that he intends to “co-opt” the newly elected senators so they will “fall in line” with the establishment and party leadership. Step two is a leadership summit for TPP’s local coordinators to teach them how to maintain the pressure on elected officials tempted to sell out to the great American middle.

Step three is readying for a possible lame duck session of Congress. Tea partiers are promising intense opposition to “several disastrous bills that will likely be introduced or reintroduced,” according to the memo. They envision the soon-bo-be-out-of-power Democrats rushing a host of bills to the floor—the cap and trade bill, further stimulus spending, and comprehensive immigration reform—and they’re set to mobilize their minions against these initiatives. It’s certainly not clear whether the Democrats have such plans, but TPP is even ready to oppose a lame duck campaign finance bill that would bring more transparency to the political process, something the tea partiers often profess to want.

None of these national moves will come cheaply. TPP estimates that the freshman orientation will cost at minimum $175,000, an eye-popping figure for the scrappy tea party movement. The leadership summits for local coordinators are pegged at another $50-$75,000 each. And the lame-duck session lobbying crusade? A cool $110,000.

Hence the need for the tea party movement to join the perpetual fundraising machine of DC politics, which will require staff and more marketing to do more fundraising. To make all this happen, tea partiers are going to have to hit up some people with really deep pockets. That fact alone could change the tenor of the movement, which is already looking to millionaires for critical support. The 40-year plan memo was presented in September as part of a fundraising pitch to a secretive and wealthy group of far-right evangelical Christian movers and shakers who have underwritten much of the culture wars over the past few decades. Then, in September, TPP announced the receipt of a $1 million donation to use for local get out the vote efforts, but it refused to disclose the name of the donor—a move that directly contravened one of the tea party movement’s core values: transparency. (Another donor, whose identity Mother Jones uncovered, gave TPP leaders the use of his private jet to travel the country rallying the troops before the election.)

TPP has other ideas for drumming up with funding, too, namely running ads on Rush Limbaugh’s radio show and the Drudge Report, which they’ve already started doing. According to TPP, these ads will help with its “brand awareness, donation requests and issue-driven buys.” Of course, it costs money to raise money like this. TPP estimates $500,000. Local activists report that weekly conference calls with the TPP leaders have featured regular appeals for money, and not in the small amounts the movement was built on. They’re looking for thousands of dollars a pop. And this raises a question posed by some local groups: Do the activists need a big, expensive national infrastructure? Especially when much of it will apparently be devoted to—what else?—having more tea parties. (TPP claims in its memo that in 2011 there will be more than 2,000 local tax day tea parties on April 15.)

But TPP does have a broader vision. In a weird mix of religious language and Madison Avenue jargon, TPP’s 40-year-plan states that its goal isn’t necessarily to take over Congress or elect any candidates. (It’s a nonprofit and can’t endorse anyway.) Instead, the tea partiers are looking to convert people. They write, “Tea Party Patriots plans to convert sixty percent or more of the population to support our core values of fiscal responsibility, constitutionally limited government, and free markets.”

Many of the people they’re hoping to convert are much younger than the aging activists who are currently showing up with Gadsen flags at their local tea parties. TPP acknowledges in its plan that while the tea party movement has succeeded in mobilizing aging baby boomers, it hasn’t exactly lit a fire among younger voters. If the tea party is to last another 40 years, it’s going to have to reach out to the under 55 set. To that end, TPP plans to follow the Republican lead and that of every other aspiring group: to hit college campuses, where it will form clubs, programs, and run recruiting programs. In its memo, the group says, “We want to explore every avenue to communicate the irreplaceable values of freedom.” In the end, though, if TPP succeeds in funding its 40-year plan and doing all the things its says it will, it won’t look so different from any other well-funded, professional conservative lobbying outfit in DC. It will, in effect, be part of the establishment.