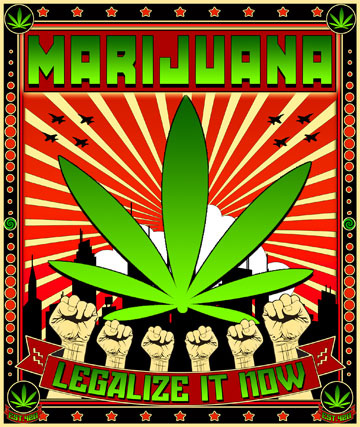 Backers of California’s referendum to legalize recreational marijuana will need to connect on a long hail Mary (Jane) if they’re going to score a victory on Tuesday. A Field Poll released on Sunday has the formerly popular Proposition 19 losing 49 to 42 percent.

The stoner world’s fog of optimism is starting to burn off. The California chapter of the National Organization for the Reform of Marijuana Laws (NORML) still expresses high hopes for Prop 19 on its website, but director Dale Gieringer told me on Monday that he personally considers the prospect of victory to be a pipe dream. “I have never thought it was likely to pass,” he said, “and it’s going exactly like I expected.”

The official Yes on 19 campaign still insists that Tuesday could be the day that ganja goes legit. “Proposition 19 is looking history in the eye and not blinking,” Democratic strategiest Chris Lehane writes in a memo released by the campaign on Sunday. He concludes that Prop 19 “is in a better position to win on election day than indicated in the mainstream media narrative” because the Field Poll was conducted before the campaign’s TV ad began running; undercounts young, cell-phone-wielding, pro-pot voters; and suffers from a “reverse Bradley effect” in which people aren’t honest with pollsters for fear of looking like potheads.

But none of those arguments can keep NORML’s Gieringer from acting like a total downer. “You have the whole elephant in the room of the feds not cooperating,” he told me. And that means Prop 19 faces an uphill fight notwithstanding the reverse Bradley effect, which isn’t real, he added. Yet what is real, he went on, is “a well-established effect that undecided voters tend to vote no on risky and controversial propositions if they are not sure of the effect.”

Of course, 47 percent of California voters have tried marijuana. So just maybe, this is a state where risky and controversial propositions with uncertain effects still have a chance.

[Editors’ note: For a rundown on how the San Francisco Giants could doom Prop 19, read Adam Weinstein’s story here]