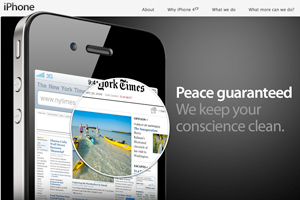 On Tuesday, a web site popped up to promote the new iPhone 4cf, “the same high quality phone as the original iPhone 4 with the added bonus of taking you one step closer to a world without conflict.” The “conflict-free” smartphone marked a departure for Apple, which has been criticized for using “conflict minerals” from war-torn areas such as the Democratic Republic of Congo in its gadgets. Design-wise, the site was a dead-ringer for the main Apple site (more images here), but by the time you got to the part where it called for the citizen’s arrest of mining executives, you had to realize something was amiss.

The visually pitch-perfect site had all the hallmarks of the Yes Men. Sure enough, its URL was registered to one “Harold Schweppes” at gatt.org, one of the anticorporate pranksters’ early spoof sites. But then, as of yesterday morning, the iPhone 4cf site had vanished. The closest thing to an explanation was a phony Apple press release condemning the site as “fraudulent and fictitious, and entirely the imagination of the group of pranksters who created it.”

Where’d it go? It’s not like the Yes Men had an ill-gotten iPhone prototype on their hands. And they’re hardly afraid of incurring the wrath of corporate America. (Check out their aggressive mockery of Chevron’s current PR campaign or their impersonation of the US Chamber of Commerce.) I emailed Yes Man Andy Bichlbaum, who explained that the site was pulled after its “heroic internet provider” got a nastygram from Apple. “Apple’s heavy-handed and humorless reaction just shows where their big mechanical (and conflict-mineral-rich) corporate heart is at. More is learned by that than would be by keeping the website up,” he wrote.

Bichlbaum said that the iPhone site will soon relaunch somewhere else. That’s good, if only because it’s a beautiful hoax. But beyond the graphics, the site’s content is confusing. It’s not immediately clear if it’s presenting a “conflict-free” phone as something cool or ludicrous. And while the site is clearly poking fun at Apple’s techno-utopian branding, it also praises the company’s efforts to keep conflict minerals out of its products as a “step in the right direction.”

Reading through the iPhone prank site, it becomes evident that its ultimate goal is not to take a bite out of Apple. As the Yes Men’s fake press release notes, “although Apple does have plans to certify its materials as conflict-free, this will by no means be any sort of solution to the situation of conflict in the Congo, nor in any way help bring an end to that conflict. Rather, the solution must be based in diplomacy.” That’s a reasonable argument, and the Yes Men deserve credit for not repeating the simplistic view that we, the American consumer, can bring peace to the DRC by merely boycotting blood tantalum or buying the right kind of electronics.

But then things get weird again. To promote a diplomatic end to the 14-year Congo conflict, the Yes Men point to the Democratic Republic of the Congo Relief, Security, and Democracy Promotion Act of 2006, sponsored by then-Senator Barack Obama to provide humanitarian aid and other assistance to the Congolese government. They suggest that President Obama might be subject to arrest for not fully implementing some of the law’s provisions, such as the appointment of a special envoy to the Great Lakes region of East Africa. Huh? Even as the Yes Men stay away from simplistic explanations for Congo’s troubles, they embrace the naive notion that what they call “the Obama Law” could stop the bloodshed. From their press release: “Regardless of whether Apple or other companies produce ‘conflict-free’ products, the Congo conflict will not end until the U.S. government chooses to enforce its own laws.” It’s odd to insist that a well-intentioned yet relatively toothless American aid bill could halt a conflict complicated by dozens of major players and a web of regional politics and rivalries.

So who else is to blame? The Yes Men point to AngloGold Ashanti, which they describe as “the mining company most responsible for financially supporting rebel groups and furthering the Congo conflict.” As Adam Hochschild reported in Mother Jones earlier this year, several years ago the South African company violated a UN embargo by giving money and perks to a Congolese warlord with an atrocious record of human-rights abuses. At the time of this unsavory deal, the Congolese conflict had been raging for more than six years; yet the Yes Men broadly suggest that AngloGold has been the driving force behind the violence. This may just be clumsy copy, but it again ignores the complexity of the situation. It also backtracks to the unfounded idea that the mineral trade has been the conflict’s primary catalyst. (And as Hochschild observed during his trip to the now-peaceful part of the DRC where AngloGold is operating, the issue of the moment is how much money the firm is taking out of the country: “As the company takes its slice of the African cake, only a tiny percentage of the proceeds from those 2.5 million ounces of gold is likely to stay in Congo.”)

The “What You Can Do” section of the iPhone spoof concludes by targeting John Paulson, the American hedge-fund magnate who’s AngloGold’s biggest shareholder. The Yes Men say he should be subject to citizen’s arrest for “pillaging the resources of the Congo.” To help you carry out that task, they provide the address of his New York office. And this would bring peace to to the Congo how?

If all this has left you completely confused about what’s happening in the Congo, much less how you can get involved, you’re not alone. Here’s hoping the Yes Men work out some of these glitches before they roll out the 2.0 version of the iPhone 4cf.