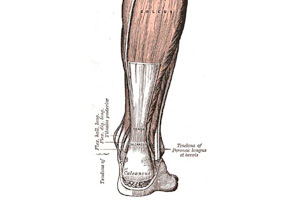 The antibiotic Levaquin can cause damage to your tendons—including the all-important Achilles. | <a href=http://commons.wikimedia.org/wiki/File:Achilles-tendon.jpg">Gray's Anatomy, via Wikimedia Commons</a>.

This is a personal story about a recent interaction I had with the health care system and the pharmaceutical industry that caused me to reevaluate a lot of things.

The Friday before Thanksgiving, I realized I was sick. I had a bad cough, a sore throat, and my nose was totally stuffed-up. I was pretty miserable. I was like that for about a week, dosing up regularly on NyQuil and DayQuil. Things seemed to get a bit better—the sore throat calmed down and the stuffy feeling went away. But I was still coughing, so this Thursday, I went to the doctor. The doctor diagnosed bronchitis and prescribed an antibiotic.

Most cases of bronchitis are caused by viruses, not bacteria, and eventually go away on their own. Many doctors don’t think it’s worth prescribing antibiotics unless the infection persists beyond a few weeks. But about 10-15 percent of bronchitis cases are bacterial, so some doctors think it’s worth prescribing antibiotics in those cases—especially if the patient has asthma, which I do. So I went to CVS to pick up my prescription. It was $25. Now granted, my insurance isn’t that great, but antibiotics are usually like $10, so I was curious. It turned out I had been prescribed something called Levaquin, which I had never heard of. My doctor never explained her reasoning for prescribing the antibiotic, so I’m not sure why she picked this one, but I decided to read the drug information on the Metro on my way into work. It turns out that Levaquin comes with a big, top-of-the-drug-information warning that it may cause “tendon damage (e.g., tendinitis, tendon rupture) during or after treatment.” Apparently, your risk for such problems is greater if you are over 60, have had a kidney, heart, or lung transplant, or are taking one of a class of drugs known as corticosteroids.

I didn’t think much about the warning and took the first dose, as prescribed, around noon on Thursday. But at the end of the day, I decided to look more into the drug. (The phrase “tendon damage” was still on my mind, I guess, and I was probably subconsciously looking for an excuse to not go to the gym.) It turns out that the tendon damage described on the label involves a lot of older people having their Achilles’ tendon snap. Yeah. But there were also complaints about long-term muscle pain and tendon damage, even in younger people.

It turns out the original top-of-the-label warning about Levaquin and drugs like it (“fluoroquinolones,” including Cipro and Avelox) was the result of a lawsuit brought by the grassroots public service advocacy group Public Citizen. It was added in 2008 after a 12-year legal battle. Dr. Sidney Wolfe, the director of Public Citizen’s Health Research Group, told me that fluoroquinolones are still “hugely overprescribed” and said that they’re “rarely the first-choice drug for any infection.”

I really started sweating (literally) when I realized that I was taking a corticosteroid—one of the classes of drugs that are supposed to exacerbate the risk of tendon damage caused by Levaquin and drugs like it. You see, my doctor had also prescribed me Advair, an asthma medicine that combines a steroid with a long-acting version of the stuff that’s in the normal “rescue” inhalers that all ashmatics have. This freaked me out. My doctor, of course, must have known I was on the drug (my prescription records were right in front of her on the screen when we talked) and probably decided it was okay, given I’m young and healthy and all that. But the 47 pages of complaints on Topix and 29 pages on Medical News Today about side effects from the drug definitely worried me.

Eventually I talked myself off the ledge. I’m actually pretty trusting of authority, and I realize that there are probably tons of medicines with as many or more complaints about them on the internet. Also, since Levaquin is the 37th most-prescribed medicine in the US (accounting for significant portions of Johnson and Johnson’s pharmaceutical revenue), there must be lots of people who take it without noticing any short- or long-term side effects.

Still, the whole thing creeped me out. When my Achilles’ started aching while I was driving later that weekend, I decided to stop taking the drug. On Monday, I called my doctor. I told her I was having side effects, but I didn’t ask her why she prescribed Levaquin despite my being on Advair. I guess I was a bit deferential. But it’s hard to challenge someone who went to medical school based on some crap you read on the internet. Instead, I just told her about the side effects (I didn’t mention that they could be psychosomatic), and asked for a different antibiotic. She prescribed one.

Still, I can’t help but think about how this happened. Why did my doctor prescribe the medicine she did? Part of it, I suspect, is my fault: people go to the doctor expecting for the doctor to offer a solution. If she had just said there was nothing she could do, I might not have been satisfied. There’s a built-in bias to prescribe. Also, drug companies spend millions of dollars promoting their drugs. I don’t know why my doctor chose Levaquin over something else (it could just be that she decided this type of antibiotic would be more effective with bronchitis than others), but it could be that she came in contact with some of that marketing material and it subconsciously affected her decision.

What do you think?