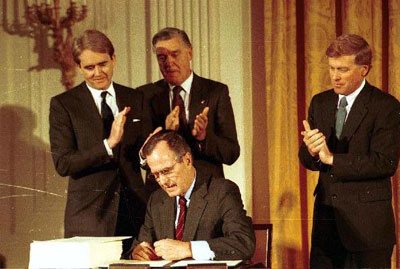 Photo courtesy the <a href="http://bushlibrary.tamu.edu/">George Bush Presidential Library and Museum</a>.

It might have been hard to tell during the past few years, with Republican opponents branding all attempts to cut greenhouse gas emissions “cap and tax,” but the idea of capping emmissions and trading emission permits was originally a GOP idea introduced to deal with acid rain. On Monday, the Environmental Protection Agency released a report celebrating the 15-year-old program to curb acid rain as an environmental (and economic) success.

The program aims to cut emissions of the two compounds that cause acid rain, sulfur dioxide and nitrogen oxide, and was endorsed by President George H.W. Bush and approved in 1990 as an amendment to the Clean Air Act. The program actually began in 1995. Since then, the American industrial sector has slashed sulfur dioxide pollution 64 percent. Moreover, the EPA reports, the program has saved $120 billion in public health costs, which is about 40 times what it cost to implement the program. The EPA concludes that the program’s success in cutting fine particle pollution has saved 20,000 to 50,000 lives per year.

Like the cap and trade system proposed for dealing with an even bigger emission problem, greenhouse gases, the program set a hard limit on emissions and then provided polluters with “allowances” for how much they could emit. Companies were able to trade permits between themselves to meet their needs, a program designed to keep costs lower for industry while achieving the overall reduction goals.

“The program’s success has demonstrated that market-based trading systems can cost-effectively reduce pollution and address environmental damage,” the EPA concludes in the report.

For more on the political history of cap and trade, see this Smithsonian Magazine piece and this Foreign Policy piece. This is, of course, something to remember as we listen to Republicans attack cap and trade and even the very idea of controls on pollution.