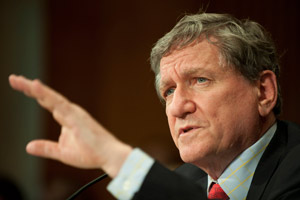 When the Obama administration began and Richard Holbrooke was appointed as special representative for Afghanistan and Pakistan policy, there was cause for some hope. Holbrooke, who died Monday night at the age of 69, was a veteran diplomat who had achieved a forced peace in the Balkans via the Dayton Accords of 1995. He could be imperious and arrogant, but with his clout and foreign policy know-how, he had a chance at pushing the camel through the AfPak needle. On March 27, 2009, the morning after President Barack Obama unveiled his Afghanistan policy, Holbrooke participated in an on-the-record briefing with reporters.

During that session, in response to a question I asked, he candidly acknowledged the problem of corruption in Afghanistan. He came across as quite smart in asserting that one of the most cost-effective steps Washington could take would be to boost the agriculture sector of Afghanistan, which in years past had been a productive and profitable source of exports. Replicate the past success, he said, and Afghans would have money and jobs—and that, in turn, would create stability in the country. He called for “a complete rethink” of the drug problem in Afghanistan, suggesting that draconian eradication programs were bound to fail. The aura of confidence he always exuded appeared to be backed up by knowledge of the region and fresh ideas.

Holbrooke gave the impression that he was both a realistic and creative thinker, someone who would have a shot at finding a path to peace (or less war). And it was entertaining in a way to watch this fellow play his role as a grand statesman. At the time, I wrote:

Holbrooke is a wonderfully engaging character—an old-school power player. He schmoozes reporters, coming across as intelligent, crafty, and concerned. He is a charmer who knows his stuff. He won’t no-comment a tough question; he will compliment the reporter on posing an insightful query, show he fully understands the issue at hand (which he does), and then explain he can’t answer it—in a manner that can be convincing, not annoying.

But Holbrooke’s skill set did not lead to much accomplishment in Afghanistan. He never worked out a productive relationship with Afghan President Hamid Karzai, who, admittedly, is a difficult target. He butted heads with other administration officials and was dismissed by European colleagues. He brokered no breakthroughs.

Still, Holbrooke’s sudden death could have an impact on what happens in Afghanistan. Julian Borger of the Guardian writes.

The special envoy’s death removes from the scene a passionate proponent of pursuing a political initiative alongside the military campaign… The Obama administration formally approves of a political discussions with the Taliban, but has not got directly involved itself. Even the CIA does not have a presidential directive empowering it to contact the Taliban directly.

The policy is to support the Afghan government’s quiet contacts with the insurgent leadership… Holbrooke almost certainly would not have hung on in his position as Afghanistan-Pakistan envoy without the protection of Hillary Clinton, who he supported throughout the Democratic primary campaign. But Clinton did not share his approach to Afghanistan. She sided with the generals who argued that it was pointless investing political capital and taking the political risks inherent in direct talks with the Taliban until the insurgents had been battered into submission with another year or so of drone attacks and special forces raids.

Borger notes that though Holbrooke favored more diplomacy he helped block an idea promoted by White House aide Douglas Lute to set up a new UN special envoy to pursue peace talks with the Taliban. Holbrooke believed this would undermine the current UN envoy to Kabul. “European diplomats say the idea of a more powerful UN peace envoy could be revived,” Borger writes, “now that Holbrooke and Lute are no longer canceling each other out in Washington… Nothing is certain, however, until the new power constellation in Washington falls into place after Holbrooke’s departure from the scene.”

Holbrooke’s death comes at a time when Obama’s Afghanistan policy is under review and heading toward a crunch point. The president has vowed to begin a disengagement in July 2011 that will lead to a hand-over of security responsibilities to the Afghan government by 2014. Yet the US military is still pursuing a counterinsurgency strategy that could take years to succeed, if at all. Meanwhile, the Afghan government led by Karzai is still inept and corrupt, and popular support for both Kabul and the US and NATO forces in Afghanistan is weak. Obama’s line is that there has been progress in Afghanistan but challenges remain. It is unclear how he will finish this unfinished business that Holbrooke has left behind.

In a column for The Daily Beast, Les Gelb, former president of the Council on Foreign Relations, offers a stark view of Obama’s current position and Holbrooke’s death that is worth quoting at length:

Afghanistan itself is no longer a vital interest of the United States, but continuing the war there tears at our own nation’s very vitals. With America drowning under a $1.5 trillion deficit for next year and an almost $15 trillion overall debt, we are verging on banana republic-hood. Most of the $125 billion being spent in and for Afghanistan could better be deducted from those bills. And how on earth can the administration justify spending billions to build roads, schools, and hospitals in Afghanistan when America’s physical and intellectual infrastructure is simply collapsing? Of course, I feel for the  Afghans; but I feel far, far more for Americans….

So, when Obama steps to some podium Thursday to announce the results of his [latest Afghanistan] policy review, he will reaffirm this transition policy. He will say that U.S. efforts to date are “making progress.”…Further, he will announce that he’s keeping his previous promise to begin some reduction of U.S. forces by July 2011, but he still won’t say how many. He will  go on to talk about general plans for U.S. force reductions over the following  three years but without any timetables. He will acknowledge problems with the government of President Hamid Karzai, its inefficiencies and corruption, but not  suggest in any way that these fundamental flaws in our ally should impair or will determine the rate of U.S. troop withdrawals….

President Obama will not be grim as he renders these policy verdicts. Administration officials say privately that while he has his doubts and worries about what he is doing in Afghanistan, Obama feels he’s reached an acceptable balance in policy and a workable political consensus in support of that policy. In many respects, Obama’s Afghan policy is much like his recent agreement on taxes with the Republicans. He doesn’t really like a lot of the policy compromises he has reached on Afghan policy with Petraeus or on tax policy with the Republicans. But on both counts, he feels safe politically. As things stand, the Republicans won’t attack him on tax policy and Petraeus won’t flay him on Afghan policy. His own fellow Democrats will scream on both counts, but to the president, they don’t seem to matter much on policy or on politics. He obviously reckons that Democratic liberals have nowhere else to turn, and he’s probably right. But who knows where the political center of gravity will be in a year and a half with America still in the economic doldrums and with America still at war in Afghanistan? And who knows how the President will be able to navigate through all this without his most gifted foreign policy thinker and doer–Ambassador Richard C. Holbrooke, my dear and best friend.

There’s no telling whether Holbrooke would have helped Obama out of this mess. After all, for all his talents, he was part of the crew that enlarged the war. Before he died, he told his Pakistani surgeon, “You’ve got to stop this war in Afghanistan.” It was a mission he had not been able to accomplish.