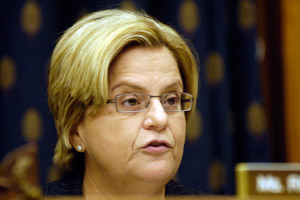 Rep. Ileana Ros-Lehtinen (R-Fla.) has yet to assume the gavel of the House Foreign Affairs Committee. But in these waning days of the 111th congress, she’s wasting no time hacking away at this country’s credibility as a champion of basic human decency. Her most recent masterpiece: killing a bill that commits the country to combating forced child marriages abroad, and directs the Obama administration to develop a multi-year strategy to address the issue. Ros-Lehtinen’s objections? That it’s too expensive, and could be used to promote abortions.

Under normal procedure, the 241 votes the bill received on Thursday would’ve been enough to win its passage. But thanks to a rule (designed to expedite legislation by disallowing additional changes) invoked by House Speaker Nancy Pelosi (D-Calif.) the bill needed a two-thirds majority—or 290 yeas—to pass, a vote count that supporters of the bill from both parties still expected to meet easily. After all, its Dick-Durbin-penned cousin in the Senate passed unanimously.

Ros-Lehtinen tried to thwart the bill by raising concerns over its five-year, $108 million price tag. But once she failed, it should have been smooth sailing. Foreign Policy‘s Josh Rogin breaks down what happened next:

[A]bout one hour before the vote, every Republican House office received a message on the bill from GOP leadership, known as a Whip Alert, saying that leadership would vote “no” on the bill and encouraging all Republicans do the same. The last line on the alert particularly shocked the bill’s supporters.

“There are also concerns that funding will be directed to NGOs that promote and perform abortion and efforts to combat child marriage could be usurped as a way to overturn pro-life laws,” the alert read.

But the bill doesn’t even include any abortion-related funding. Still, Ros-Lehtinen’s blast was enough to scare off any remaining pro-lifers who hadn’t been sufficiently freaked out by her warnings about its cost.

Ros-Lehtinen’s efforts to thwart this bill show that she wants to do as much as she can, as early as she can, to frustrate plans to improve the mechanics of diplomacy. In what should have been a win for bipartisan decency, scare tactics won the day. Between Ros-Lehtinen’s unwavering skepticism of global diplomacy, hard-line approach towards Iran and North Korea, and unabashed slamming of the State Department and foreign operations, it’s becoming clear what sort of foreign policy course the GOP intends to chart over the next two years: one that dismisses the pursuit of humane objectives.