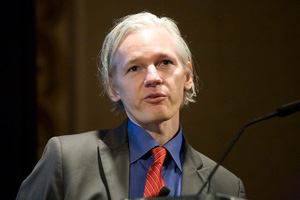 When the “Afghan war logs” became public earlier this year, I focused on WikiLeaks from the standpoint of its huge impact on the media. The ongoing release of a quarter million State Department cables has since unleashed a torrent of hot debate about government secrecy and whether Julian Assange’s organization is a force for good or evil.

Like many others, I’ve marinated myself in related articles and commentary over the last week but remain ambivalent about some of the complex moral issues involved. I’ve also been pondering a question that seems noticeably absent from the discussion: Could it be that WikiLeaks is actually the best thing in a long time to afflict US national security?

The cacophonous phenomenon on the world’s front pages has been a grand wake-up call—the rise of cyberwar is no longer a matter of theory. It’s here whether you believe Assange is an enemy or a hero. If it proves true that a low-level Army analyst was able to get his hands on such a colossal amount of sensitive documents, what does that say about Pentagon preparedness for the security challenges of the proliferating information age?

So far some contents of “cablegate” itself have informed our view of just how serious an issue this is. As the Times reported on Sunday, “repeated and often successful hacking attacks from China on the United States government, private enterprises and Western allies” have been taking place since as far back as 2002. One previously unreported attack “yielded more than 50 megabytes of e-mails and a complete list of user names and passwords from an American government agency.”

The China cables also show the fire with which WikiLeaks plays; you get the sense that if some of the redacted names were revealed, it could potentially be disastrous, both to individuals involved and to US intelligence gathering.

It’s noteworthy that the Obama administration’s assessment of the damage from WikiLeaks has consistently been inconsistent. The latest round has Attorney General Eric Holder saying that “national security of the United States has been put at risk,” while Defense Secretary Robert Gates says that concerns about potential harm are “significantly overwrought” and that the disclosures will have a “fairly modest” impact on foreign policy. The mixed message would seem to suggest that the US government yet lacks a coherent approach to safeguarding the nation’s information infrastructure.

In the later years of the Bush administration, the federal government began to prioritize cyberwar, a focus continued by the Obama administration. But today there are the troubling, all too familiar signs of unpreparedness, agency turf wars and legal muddle. The Pentagon’s Cyber Command seeks to expand its powers aggressively and is, not coincidentally, publicizing that fact now. According to the Washington Post, its general in charge recently testified to Congress that he could not adequately defend the country against cyber-attack because it “is not my mission to defend today the entire nation.” If an adversary attacked power grids, he said, a defensive effort would “rely heavily on commercial industry.” Former national intelligence director Dennis C. Blair warned, “This infuriating business about who’s in charge and who gets to call the shots is just making us muscle-bound.”

By some accounts the world hasn’t seen anything yet in terms of the looming dangers of cyberwar. An attack could cripple America, argues former counterterrorism chief Richard Clarke, striking everything from train routes and electrical grids to bank data and medical records.

WikiLeaks over the last few months, then, may have exposed US government vulnerability in an alarmingly useful way, if one not much in line with Assange’s ideas about undermining state power. You can bet it has lit a serious fire under officials involved with the nation’s cybersecurity, who now must be working that much more intensively to plug any leaks in the ship of state and build up defenses against future attacks. They are, of course, likely toiling in secrecy. For now, anyway.

UPDATE: On the eve of his arrest in London, Assange publishes an article in The Australian: “Don’t shoot messenger for revealing uncomfortable truths.” He opens with a quote from Rupert Murdoch: “In the race between secrecy and truth, it seems inevitable that truth will always win.”