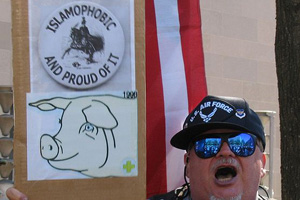 It’s never a good sign when you find yourself longing for the halcyon days of George W. Bush. But after a year in which right-wing activists and politicians identified America’s greatest threats as mosques and infants, you could be forgiven for feeling a bit nostalgic for the man who responded to the 9/11 attacks by emphasizing that “Islam is a religion of peace.”

So, is America Islamophobic? It depends. For the overwhelming majority of Muslims, America’s still a pretty sweet place to work and pray (just watch out for these fellas). And as conservatives like Jeff Jacoby are quick to point out, when it comes to reported hate crimes, Jewish Americans still have it worse. Much, much worse. But with precious few exceptions, anti-Semitism is confined to the paranoid fringe; you’d never see a slew of presidential candidates line up to, say, protest the construction of a synogogue.

2010 was the year Islamic fearmongering officially went mainstream. Here’s a quick look back at how the heck it happened. Enjoy.

The Year in Islamophobia on Dipity.

Did we miss anything? Let us know in the comments.