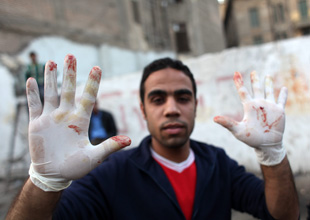 EDITOR’S NOTE: For more on the situation in Egypt, check out our up-to-the-minute coverage.

“Can you imagine what it feels like to have a black cloak drawn over the country and everything is cut off?” Laura* asks me. She’s stuck in her apartment in Cairo, and finally cell phones are working again, for now. I got through to her twice on Saturday, and she’s been filling me in on what it’s like to be a foreigner in the city. She’s grateful to have phone service again, because on Friday, that means of communication had effectively vanished. “You couldn’t call anyone. You couldn’t access the internet; everything was just shut off.”

Laura, one of my best friends, has been in Egypt for less than a month. After spending nearly two years traveling around West Africa, she was looking forward to a calmer existence in cosmopolitan Cairo, where she’d be working with refugees. Then, shortly after she moved there, the protests began and chaos erupted. When I spoke with her on Saturday, she described the scene on the ground: “I’m looking out my balcony and it’s gotten to this point where police are basically gone, the military is guarding the square and certain ministries, but there are just thugs and bandits in the streets with guns, and a lot of looting is happening.”

“I have a bag at the door with a passport and some water in it in case we have to run. I don’t want to be alarmist, but things are deteriorating very quickly.

Egyptian President Hosni Mubarak’s attempts to suppress protesters by cutting off internet and cell phone service only seems to be making the situation worse. Thousands continue to defy the police, ignore the imposed curfew, and rally to demand that the current regime step down. And sadly, in some cases the protestors have been met with brutality. “I saw an old woman shot in the face yesterday,” Laura tells me.

Even worse, police seem to be shooting people and then beating them afterwards.

We were walking along the Kornish next to the Nile, and we saw these people on the bridge, not even protesting, just looking at what’s going on. Police trucks—not military, but police, there’s a distinction because they’re not necessarily working together—went across the bridge and opened fire on people standing there. Then there were these plain-clothed police—that’s the scariest thing, is that they’ve hired thugs who are dressed in normal clothes and carry canes to beat people—going up onto the bridge and taking them down off the bridge and beating them. Because if you’ve been shot, that’s evidence you’re a protester, so therefore you need to be beaten.

Laura and her friend saw a young woman who’d been grazed by a bullet caught amidst a frenzy of canes. They grabbed her and dragged her away from the mob. “We had to link arms with her and walk her through these checkpoints so she would stop being beaten,” Laura explains. “It’s so fucking unreal. I don’t know what’s going on.”

On Friday afternoon, Laura and her friend made a trip to the American Embassy, just blocks away from Laura’s apartment, to register in case anything happened to them. When they got there, a curfew had just been declared and they were forced to spend the night. During their stay, the Embassy came under attack, and it was rumored that a group of looters stole armored Embassy vehicles.

Now back at her apartment in the relatively calm Garden City neighborhood, Laura can do little but peer out from her balcony at an apocalyptic city echoing with gunshots. “We keep looking outside and seeing these men walking around with sticks, and we assume they’re defending the neighborhood. But no one knows who anyone is.”

I talked to Laura again a little later, around 3 AM on Sunday morning, and she sounded like herself again; sense of humor intact. She said the men wandering the streets below were her neighbors on a make-shift patrol, trying to maintain order since the police had fled. “The men downstairs have swords, but they’re eating yogurt,” she tells me, laughing a little. “One guy on the corner has an AK-47.”

Every so often, she hears tanks rambling down the Kornish, a street running parallel to the Nile about a block away. Her neighbors have moved big flowerpots in a maze-like pattern on her street so that cars won’t be able to zoom through very quickly. And even though tension is high and drama continues to unfold around them, life for those not directly involved in the protests is, for now, a waiting game. The American Embassy has encouraged those with “their own means of transportation” to leave the city, but so far have ordered no emergency evacuations for US citizens.

“I have a bag at the door with a passport and some water in it in case we have to run,”  Laura tells me. “I don’t want to be alarmist, but things are deteriorating very quickly. It’s probably fine, probably nothing’s going to happen to me. But at the same time, no one expected any of this to happen.”

*Name has been changed for safety reasons.