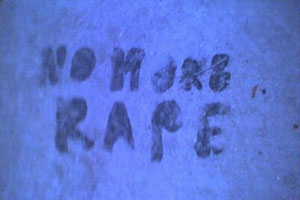 [Editor’s Note: On Thursday, House Republicans, facing an onslaught of outside pressure, decided to remove the controversial “forcible rape” provision from their “No Taxpayer Funding for Abortion Act.” The original language from the Hyde Amendment—which bans federal funding for abortions through Medicaid except in cases of rape, incest, or to save a mother’s life—will replace the “forcible” provision, said a spokesman for Rep. Chris Smith (R-N.J.), who introduced the bill. The move comes in response to heavy criticism in recent days from outside advocacy groups including MoveOn.org and Emily’s List and the growing #dearjohn campaign, aimed at House Speaker John Boehner (R-Ohio), that opposed the abortion funding bill. Read more about about the House GOP’s backtracking here. Nick Baumann’s original story on the GOP’s attempts to redefine rape is below.]

Rape is only really rape if it involves force. So says the new House Republican majority as it now moves to change abortion law.

For years, federal laws restricting the use of government funds to pay for abortions have included exemptions for pregnancies resulting from rape or incest. (Another exemption covers pregnancies that could endanger the life of the woman.) But the “No Taxpayer Funding for Abortion Act,” a bill with 173 mostly Republican co-sponsors that House Speaker John Boehner (R-Ohio) has dubbed a top priority in the new Congress, contains a provision that would rewrite the rules to limit drastically the definition of rape and incest in these cases.

With this legislation, which was introduced last week by Rep. Chris Smith (R-N.J.), Republicans propose that the rape exemption be limited to “forcible rape.” This would rule out federal assistance for abortions in many rape cases, including instances of statutory rape, many of which are non-forcible. For example: If a 13-year-old girl is impregnated by a 24-year-old adult, she would no longer qualify to have Medicaid pay for an abortion. (Smith’s spokesman did not respond to a call and an email requesting comment.)

Given that the bill also would forbid the use of tax benefits to pay for abortions, that 13-year-old’s parents wouldn’t be allowed to use money from a tax-exempt health savings account (HSA) to pay for the procedure. They also wouldn’t be able to deduct the cost of the abortion or the cost of any insurance that paid for it as a medical expense.

There used to be a quasi-truce between the pro- and anti-abortion rights forces on the issue of federal funding for abortion. Since 1976, federal law has prohibited the use of taxpayer dollars to pay for abortions except in the cases of rape, incest, and when the pregnancy endangers the life of the woman. But since last year, the anti-abortion side has become far more aggressive in challenging this compromise. They have been pushing to outlaw tax deductions for insurance plans that cover abortion, even if the abortion coverage is never used. The Smith bill represents a frontal attack on these long-standing exceptions.

“This bill takes us backwards to a time when just saying no wasn’t enough to qualify as rape.”

“This bill takes us back to a time when just saying ‘no’ wasn’t enough to qualify as rape,” says Steph Sterling, a lawyer and senior adviser to the National Women’s Law Center. Laurie Levenson, a former assistant US attorney and expert on criminal law at Loyola Law School in Los Angeles, notes that the new bill’s authors are “using language that’s not particularly clear, and some people are going to lose protection.” Other types of rapes that would no longer be covered by the exemption include rapes in which the woman was drugged or given excessive amounts of alcohol, rapes of women with limited mental capacity, and many date rapes. “There are a lot of aspects of rape that are not included,” Levenson says.

As for the incest exception, the bill would only allow federally funded abortions if the woman is under 18.

The bill hasn’t been carefully constructed, Levenson notes. The term “forcible rape” is not defined in the federal criminal code, and the bill’s authors don’t offer their own definition. In some states, there is no legal definition of “forcible rape,” making it unclear whether any abortions would be covered by the rape exemption in those jurisdictions.

The main abortion-rights groups despise the Smith bill as a whole, but they are particularly outraged by its rape provisions. Tait Sye, a spokesman for Planned Parenthood Federation of America, calls the proposed changes “unacceptable.” Donna Crane, the policy director of NARAL Pro-Choice America, says that making the “already narrow exceptions for public funding of abortion care for rape and incest survivors even more restrictive” is “unbelievably cruel and heartless.”

“This bill goes far beyond current law,” says Rep. Diana DeGette (D-Colo.), a co-chair of the congressional pro-choice caucus. The “re-definition” of the rape exception “is only one element” of an “extreme” bill, she adds, citing other provisions in the law that pro-abortion rights groups believe would lead to the end of private health insurance coverage for abortion.

“Somebody needs to look closely at this,” Levenson says. “This is a bill that could have a dramatic effect on women, and language is important. It sure sounds like somebody didn’t want [the exception to cover] all the different types of rape that are recognized under the law.”