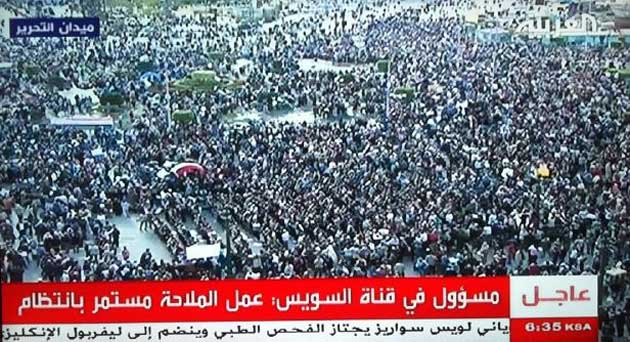 I don’t say this very often, or at all, but Malcolm Gladwell is totally on the money today. Twitter bears about as much responsibility for the Egyptian uprising as George Soros, Mrs. O’Leary’s cow, and the Flying Spaghetti Monster. Yet in their determination to find a story line—an overarching narrative—to the Mideast’s tumult, too many journalists and pedants are overstating the role of the 140-Character Canon in shaping human events. In doing so, they sound as navel-gazingly and lazily conspiratorial as a horde of Glenn Beck evangelists. Anyone who lived through 1989 or the civil rights era or 1967 or 1956 knows that media technology is not a motive force for civil disobedience. Arguing otherwise is not just silly; it’s a distraction from the real human forces at play here.

But no one can say it better than Gladwell:

Right now there are protests in Egypt that look like they might bring down the government. There are a thousand important things that can be said about their origins and implications: as I wrote last summer in The New Yorker, “high risk” social activism requires deep roots and strong ties. But surely the least interesting fact about them is that some of the protesters may (or may not) have at one point or another employed some of the tools of the new media to communicate with one another. Please. People protested and brought down governments before Facebook was invented. They did it before the Internet came along. Barely anyone in East Germany in the nineteen-eighties had a phone—and they ended up with hundreds of thousands of people in central Leipzig and brought down a regime that we all thought would last another hundred years—and in the French Revolution the crowd in the streets spoke to one another with that strange, today largely unknown instrument known as the human voice. People with a grievance will always find ways to communicate with each other. How they choose to do it is less interesting, in the end, than why they were driven to do it in the first place.