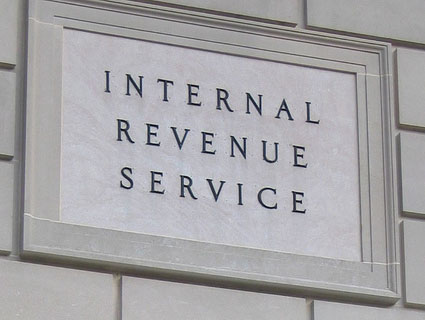 Under a GOP-backed bill expected to sail through the House of Representatives, the Internal Revenue Service would be forced to police how Americans have paid for their abortions. To ensure that taxpayers complied with the law, IRS agents would have to investigate whether certain terminated pregnancies were the result of rape or incest. And one tax expert says that the measure could even lead to questions on tax forms: Have you had an abortion? Did you keep your receipt?

In testimony to a House taxation subcommittee on Wednesday, Thomas Barthold, the chief of staff of the nonpartisan Joint Tax Committee, confirmed that one consequence of the Republicans’ “No Taxpayer Funding for Abortion Act” would be to turn IRS agents into abortion cops—that is, during an audit, they’d have to detemine, from evidence provided by the taxpayer, whether any tax benefit had been inappropriately used to pay for an abortion.

The proposed law, also known as H.R. 3, extends the reach of the Hyde Amendment—which bans federal funding for abortion except in cases of rape, incest, or when the life of the mother is at stake—into many parts of the federal tax code. In some cases, the law would forbid using tax benefits—like credits or deductions—to pay for abortions or health insurance that covers abortion. If an American who used such a benefit were to be audited, Barthold said, the burden of proof would lie with the taxpayer to provide documentation, for example, that her abortion fell under the rape/incest/life-of-the-mother exception, or that the health insurance she had purchased did not cover abortions.

“Were this to become law, people could end up in an audit, the subject of which could be abortion, rape, and incest,” says Christopher Bergin, the head of Tax Analysts, a nonpartisan, not-for-profit tax policy group. “If you pass the law like this, the IRS would be required to enforce it.”

The proposal, which House Speaker John Boehner (R-Ohio) has declared a top priority of the new Republican Congress, has 221 cosponsors and is expected to pass the House easily. The bill caused controversy and sparked a national protest campaign in January after Mother Jones reported that it would limit the Hyde Amendment’s rape exception to cases of “forcible rape.” Experts told Mother Jones that move could prevent Medicaid from paying for abortions in many rape cases, including statutory rapes. Despite the presence of many other controversial provisions, the bill regained momentum after its sponsors promised to strip the “forcible rape” language. But during Wednesday’s hearing, Rep. Mike Thompson (D-Calif.) highlighted the IRS enforcement issue, which has until now flown under the radar. He asked:

Would a woman have to certify that the Health Savings Account funds she spent on birth control pills or for a doctor’s visit weren’t used to pay for an abortion? If a woman were audited, would IRS agents be at her house demanding court documents or affidavits proving that her pregnancy was the result of rape or incest?

Barthold replied that the taxpayer would have to prove that she had complied with all applicable abortion laws. Under standard audit procedure, a woman would have to provide evidence to corroborate facts about abortions, rapes, and cases of incest, says Marcus Owens, an accountant and former longtime IRS official. If a taxpayer received a deduction or tax credit for abortion costs related to a case of rape or incest, or because her life was endangered, then “on audit [she] would have to demonstrate or prove, ideally by contemporaneous written documentation, that it was incest, or rape, or [her] life was in danger,” Owens says. “It would be fairly intrusive for the woman.”

Not everyone has “contemporaneous written documentation” that a pregnancy was the result of rape or incest. And, as Owens notes, adults sometimes pay for abortions for their children. If H.R. 3 becomes law, parents could face IRS questions about whether they spent pre-tax money from health savings accounts on abortions for their kids. “It would seem there would have to be a question about that [in an audit] and maybe even a question on the tax return,” Owens says.

The bill contains no instructions for how the IRS should enforce it. The wording of the legislation is so vague that the Joint Tax Committee offered several different interpretations of which parts of the tax code it might actually affect. But the law will unquestionably affect some portion of the tax code—an entire section of the bill is titled “Prohibition on Tax Benefits Relating to Abortion.” (A spokesman for New Jersey GOP Rep. Chris Smith, the main author of the bill, did not respond to a request for comment. A spokesman for the IRS said the agency does not comment on pending legislation.)

“The Internal Revenue Service has no business interfering with a woman’s right to a safe, legal, constitutionally-protected medical procedure,” Thompson tells Mother Jones. “Private health care decisions belong to a woman, her family, and her doctor—not a government auditor.”

Most IRS agents would likely agree, Owens says: “I don’t think [IRS agents] enjoy prying around into those sorts of private matters.” Another IRS veteran tells Mother Jones he doesn’t believe his ex-colleagues would want to enforce such a law. “You can’t ask people to go out and ask some woman about what the circumstances are surrounding her abortion. They just won’t do it.”

UPDATE: NARAL Pro-Choice America, one of the major groups supporting abortion rights, has issued a statement responding to this story:

“This bill gets more outrageous and insulting by the day. Not only would a woman have to describe her sexual assault to the police, but she could then be forced to relive that horrifying experience with an agent from the IRS,” said Nancy Keenan, president of NARAL Pro-Choice America. “The 221 members of Congress who signed their names to this egregious bill must explain to their constituents why they want to give the IRS authority to audit rape survivors.”

It’s hard to know exactly what form “describ[ing] her sexual assault to the… IRS” would take, since this bill hasn’t become law. But as I note in the story, “contemporaneous written documentation” is a general standard for the agency, so it’s likely that, barring a change to the law, a woman would need to provide such documentation to the IRS during an audit. But what would meet the standard? A police report? Trial records? A doctor’s note? Again, it’s hard to predict.

UPDATE 2:  In comments, HyperTyler asks whether this means the GOP is abandoning HIPAA, the law that protects privacy of health records. Answer: not really. The law allows law enforcement agents to obtain such records by submitting a written request. IRS agents conducting an audit almost certainly qualify as law enforcement agents in this context.

UPDATE 3: Kevin Drum has more on this.