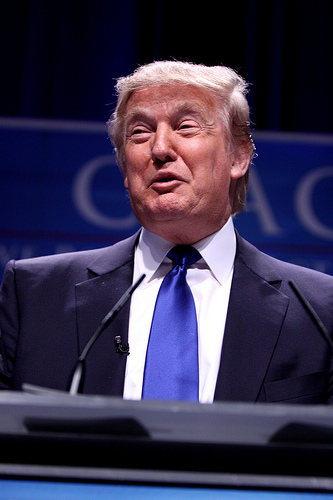 So this is how Donald Trump pivots from his birther message, now that President Obama has vanquished that hideous meme: He unleashes the f-bomb.

In a Thursday night speech in Las Vegas, Trump railed against lawmakers that he described as “blood suckers,” bouncing from subjects like gas prices, Iraq, and foreign trade. “We have weak, pathetic leadership,” Trump said of the Obama administration. “Our leaders are stupid, they are stupid people.”

But that paled in comparison to his expletive-laden zingers on foreign policy and trade. Speaking about America’s military presence abroad, he said:

Then, on the issue of oil prices and OPEC, the coalition with control on much of the world’s oil supply, he quipped:

We have nobody in Washington that sits back and said, you’re not going to raise that fucking price.

And despite the fact that some of his clothing is made in China, Trump bashed the Middle Kingdom. If elected president, what would his message for China be?

“Listen you motherfuckers, we’re going to tax you 25 percent!”