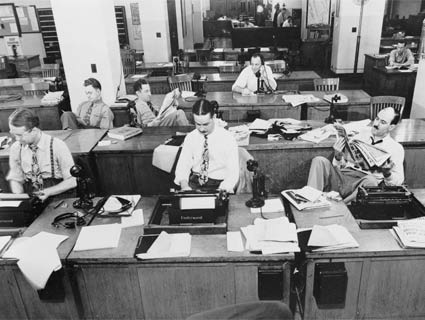 <a href="http://www.loc.gov/pictures/resource/cph.3c12969/">Marjory Collins/Library of Congress

Last week, the New York Times debuted a long-awaited paywall, and stats blogger Nate Silver used the launch as an opportunity to explore the value of a news organization based on the amount of original reporting it produces. While Silver’s rankings could be a valuable tool for news organizations, Mother Jones‘ Nick Baumann finds Silver’s methodology wanting.

“The results, as you might expect, made the Times [paywall] look like a pretty good value,” Baumann writes. But the real problems are in how Silver ranks “original reporting”—namely that online citations don’t always identify the outlet, and that larger, established news organizations sometimes get credit for breaking stories when smaller orgs actually had the scoop first. That’s not to say that rankings like this don’t have incredible value for media, but that they need to be explored in a deeper manner. Baumann writes:

It’d be nice to see a foundation interested in journalism—the Knight Foundation, say, or Google.org—invest some time and money to expand and rework the rankings. It would be great to see media outlets competing to produce more and better original reporting.

Ultimately, Baumann believes rankings like this, if done right, could be a valuable barometer for measuring quality in journalism. Let’s hope someone takes up his call to arms.

What’s wrong with the AT&T/T-Mobile merger?

Free Press’s Tim Karr weighs in on the mega-merger with five reasons why it’s not so great for consumers. According to Karr, “consolidation of the scale being proposed by AT&T resembles the old railroad and oil trusts of the 19th century.”

Karr also notes that the merger would erode competition, result in higher prices and fewer choices for consumers, eliminate perhaps tens of thousands of jobs, stifle innovation in the tech sector, and threaten free speech.

How will the merger affect low-income wireless users?

The disappearance of T-Mobile, whose low-cost plans offering unlimited data appealed to low-income wireless users, could have a disproportionate impact on communities of color who rely on unrestricted text and web plans, and especially people who don’t own computers.

At Colorlines.com, Jamilah King notes that “Mobile broadband is fast becoming the future of the internet, and it’s already an important way in which communities of color are helping to close the digital divide.” Blacks and Latinos, she says, are among the biggest users of mobile technology, “and in many cases, it’s the primary way that they surf the Web.”

If unlimited data plans end, and prices for wireless service rise for current T-Mobile users if and when a merger is completed, the digital divide separating under served communities from customers who can afford higher fees will almost certainly widen. This could have a devastating ripple effect on everything from people who use phones for business to people who use phones for social networking—and may affect African-Americans, Latinos, and immigrant populations more.

What about net neutrality?

Truthout’s Nadia Prupis recently interviewed Free Press political adviser Joel Kelsey, who says that the FCC’s December decision not to regulate wireless carriers now seems shortsighted. “[The FCC’s] justification was that you’re less likely to see some of the same types of anti-competitive actions for fear that a carrier would lose a large number of customers … looking at it through the lens of this merger, I think that justification has kind of gone out the window.”

How much cash did ISPs donate to the cause?

Crunchgear had an eye-opening article outlining the amount of money donated by ISPs over the last four election cycles to the 15 members of the House Subcommittee on Communications and Technology who opposed net neutrality. The article’s findings are revelatory: “Looking at the 15 congressmen who voted against net neutrality, the top three ISPs gave their campaigns some $868,024 over the past four election cycles. You can interpret that as, well, they were able to knock down net neutrality for less than $1 million, which is pretty much a drop in the bucket for these companies.”

Canada, our media neighbors to the north.

The AT&T merger is dominating the media policy news cycle, but we shouldn’t let it distract us from an interesting ruling for media made by our neighbors to the north. As Yes! Magazine‘s Dave Saldana reports, a Canadian law which prohibits broadcast news from knowingly spreading disinformation—an anti-lying law—was recently upheld by the Canadian Radio-television and Telecommunications Commission.

Saldana writes: “With little fanfare, the CRTC last month scrapped a proposal to revoke or relax a rule on ‘prohibited programming content’ that includes ‘broadcasting false or misleading news.’ The CRTC withdrew the plan when a legislative committee determined that the rule does not run afoul of the Canadian Charter of Rights and Freedoms, which like the U.S. Constitution, guarantees press freedoms.”

He goes on to raise the obvious question: If Canada can do this, why can’t the United States? After all, there have been cases where journalists have been pressured into knowingly inserting false statements into stories under orders from executives, in order to protect big business interests engaged in harmful practices.

Unfortunately, the media’s legal right to lie is protected by the First Amendment. But if Canada can ban false reporting without violating freedom of the press, why can’t we choose truth over truthiness?

Inter Press Service’s Andrea Lunt reports on a recently completed a study of women in news media covering more than 170,000 people in 500 companies across 60 countries. The study was produced by the International Women’s Media Foundation.

Lunt says the study shows that gender inequality in the media sphere has been institutionalized. The good news is that the gap appears to be closing, especially at the executive level, where women have more than doubled their presence in the past fifteen years. A 1995 study reported women in 12% of the top management positions in 239 nations. The IWMF report shows that women now hold 27% of the top management jobs.

Progress? Certainly. But there’s still a long way to go.

This post features links to the best independent, progressive reporting about media policy and media-related matters by members of The Media Consortium. It is free to reprint. To read more of the Wavelength, click here. And for the best progressive reporting on critical economy, environment, health care, and immigration issues, check out The Audit, The Mulch, and The Diaspora. This is a project of The Media Consortium, a network of leading independent media outlets.