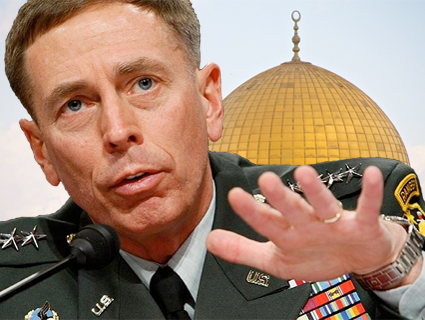 There are plenty of reasons to be skeptical of Gen. David Petraeus’ upcoming job move from Kabul to the CIA: his cult of personality; his overselling of progress in Afghanistan; his escalation of the air war and violent conventional tactics; the idea that intelligence policy might become more militarized, and the military might become spookier. But here’s a novel criticism of the golden general from right-wing Islamophobe Frank Gaffney, he of the “ground zero mosque” freakout, the military logo freakout, and the Islamic law freakout: He’s a mind slave to Shariah law! ThinkProgress reports on Gaffney’s response in a recent Q&A at Liberty University:

Let me just mention several different ways in which this kind of influence operation is being run against those sorts of target sets…I’m sure most of you witnessed General David Petraeus, the much admired military leader, responding to the Quran burning down in Florida by Pastor Terry Jones. Saying that the holy Quran – repeatedly – the holy Quran must not be desecrated, and in other ways, suggesting that what we are doing here is a kind of submission to this program, lest we give offense, which is a blasphemy and a capital crime under Sharia.

Man, is that a high bar for true-blue Americanness. Petraeus must be asking himself: How many Afghan villages does a guy have to flatten to prove he’s no fan of Islamic jurisprudence?