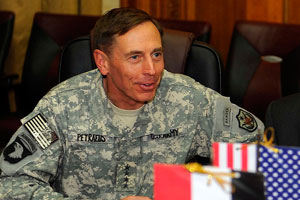 Gen. David Petraeus has never been promoted. Everyone else just demoted themselves in order to serve under him. | Flickr/<a href="http://www.flickr.com/photos/soldiersmediacenter/2865541080/sizes/l/">US Army</a>.

Mark Bowden has written a long profile of General David Petraeus for Vanity Fair. Spencer Ackerman doesn’t like it:

If you’ve never read a profile of Gen. Petraeus and you don’t mind really purple, sycophantic prose — “[W]hen Petraeus tests himself, he usually wins” is a line that survived the editing process — then by all means check out Mark Bowden’s thing in Vanity Fair.

Spencer has more, but the “when Petraeus tests himself, he usually wins” line reminded me of the whole “Chuck Norris facts” meme, which parodied the ridiculous badassness/kickassery of Chuck Norris. The meme was later applied to Jack Bauer and Vin Diesel, but if anyone is a great target for it, it’s Petraeus. This isn’t the first time someone has thought of this, of course. There’s already GeneralPetraeusFacts.com, a not-entirely-tasteful site that a friend and I created in our spare time back in the day (I didn’t write all of the “facts”). But the Bowden article definitely stands a chance of kick-starting a “Petraeus facts” meme. These lines are also in the piece:

Beyond his four-star rank, he possesses a stature so matchless it deserves its own adjective—call it “Petraean,” perhaps.

He is all gristle and bone. You sense that, if he ever were to overindulge, the fat cells would not know where to check in.

The sheer velocity of his career has created aftershocks, and those who stood too close have sometimes been bruised.

Interestingly, Bowden seems to recognize that Petraeus has been glorified:

For success to breed success, it must be seen and be heard. Much of his story has begun to undergo the slight embellishment and exaggeration that turn history into legend…—and this, too, contributes to his leadership. He is smarter, he is stronger, he is faster, he is more determined. He is “King David.” Once, in a heady and unguarded moment after an impressive ceremony in Iraq before 800 cheering sheikhs, he joked to a Washington Post reporter that sometimes it felt “like a combination of being the president and the pope.” He regrets that remark, which was turned into an embarrassing headline, but the Legend of David Petraeus now defines what an American military officer should be.

The Bowden piece closes with an anecdote. When Petraeus was diagnosed and treated for prostate cancer last year, it was kept a secret. The New York Times eventually got a tip, and asked about it, so Petraeus’ staff prepared a press release. The General himself added a line about how the cancer was kept secret to “avoid giving al-Qaeda hope.” His wife later took it out, but it says a lot about the man. Bowden may recognize that the Petraeus story “has begun to undergo the slight embellishment and exaggeration that turn history into legend.” But it seems that the General himself has bought into at least part of the legend.