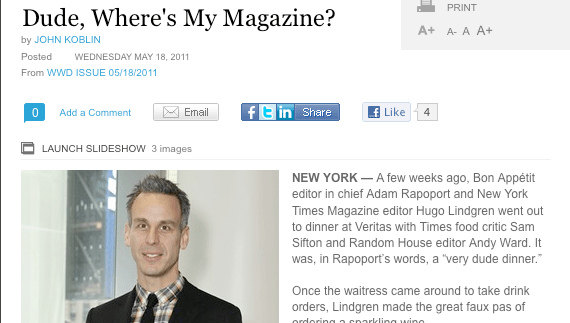 Today fashion bible Women’s Wear Daily (WWD) published a super-manly article on the “dudes” who are the new generation of magazine editors. WWD‘s profile features three straight, white, male editors who live in a bro-tastic world where “these guys say ‘Hey, man’ as a salutation” and “practice their golf swing in the office.” According to WWD, editors Adam Rapoport (Bon Appétit), Josh Tyrangiel (Bloomberg BusinessWeek), and Hugo Lindgren (New York Times Magazine) are “Dude-itors”: editors who are so “neurotically dude-ish” they’re revolutionizing the publishing industry. In the words of Time managing editor Rick Stengel, “They will be the guys who will figure everything out. Or not.”

Here are just a few choice excerpts from WWD‘s look into the lives of these three dudes.

“If you work in this industry, especially glossy magazines, there are a lot of women and a lot of gay men,” said Rapoport. “The notion of being some meathead frat boy working in this business is not very realistic.”

“He’s both a bro and a dude,” Tyrangiel said, describing Lindgren.

Or Lindgren on rocker Ric Ocasek… “I Love Ocasek. I love his pop songs, and men of my generation hold him in high esteem for marrying the hottest Sports Illustrated swimsuit model of all time.” You go, Hugo!

Also, true dudes can jump onto a roof in Italy.

I think (pray) WWD is making all three Dude-itors look far bigger douchebags than they are. I personally find the entire article a sexist piece of bonobo feces, and I think it does a real disservice to men too. Just because you are a white, 30 to 40-something, straight guy working in journalism doesn’t make you a frat-boy wannabe: it just happens that these three particular straight, white, 30 to 40-something Dude-itors are doing backstrokes in the Fountain D’ouche thanks to the guy who wrote the article, John Koblin. And one wonders: if these guys are so dudely, what are they doing in an issue of Women’s Wear Daily anyway?

p.s. If you’re wondering what the WWD article would look like dudettes instead of dudes, read Ann Friedman’s masterful parody here, which features cameos by Mother Jones editors Clara Jeffery and Monika Bauerlein.