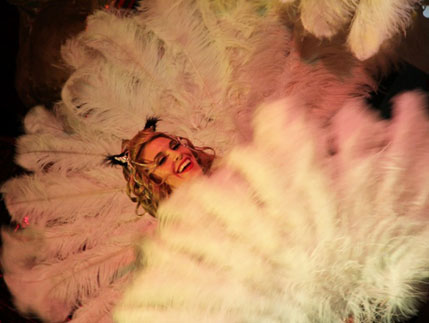 What do Benny Goodman, trance beats, steampunk fashion, and tasseled pasties have in common? They’re all part of a new West Coast underground music fad called electro swing or, as one DJ dubs it: BoomSwing. Begotten in Europe (Paris and London), the new sound—big band meets club beats—has made its way, I’m told, onto turntables and dance floors in New York and the San Francisco Bay Area.

It’s still pretty underground. Then again, it’s only really been incubating in the States for a few years. I recently headed over to the Oakland, California, hipster hangout Café Van Kleef for a live taste of the dernier cri.

Van Kleef—which the New York Times Style magazine pegged as a watering hole for Oakland’s enduring music Renaissance—mixes a visual cocktail of anachronistic harmony, making it an apropos venue for an electro-swing show. There’s a large gothic-looking chandelier, painted mannequin heads climbing ladders, taxidermy fish and mammals, and the owner’s own colorful paintings. With regulars like Benny—not Goodman, but rather a chatty tamale seller who likes to spend a portion of his proceeds on Van Kleef’s strong libations—and another lady who challenges every stranger to an arm wrestle, the shoebox-shaped (and sized) bar feels like a carnival held in your batty grandmother’s attic.

At the back of the room, electro-swing DJ Cyril Noir layered samples of Goodman and Nina Simone’s horn-backed vocals over the airy house beats of Cormac and Parov Stellar. “The concept is to take swing from the ’20s, ’30s, and even ’40s and hybridize that with modern electronic music,” Noir told me. “Swing has a party vibe, a speakeasy vibe, a lot of dancing. Electro swing aims to bring it up to date with modern beats.”

It seems effective: A faithful crowd of electo-swing enthusiasts has shown up in steampunk garb (see BoingBoing for more than you ever needed to know about this), a style that merges flapper-era fashion with retro sci-fi fantasy. “Like Jules Verne,” Noir explains. “Victorian meets modern steam-powered stuff.” One man, sporting a handlebar mustache, dark vest, and black-and-white saddle shoes, showed me a pair of flying goggles he made from welding glasses, screw-on rims, and plastic floral embellishments.

Another key component of the Bay Area scene, more so than in New York or Europe—and further adding to the genre’s old-meets-new aesthetic—is Burlesque dancers. The Van Kleef crowd was treated to several: Calamity LuLu wore a 17th-century corset and pompadour. Ella Mental (Noir’s partner) and GiGi offered a peep-show from behind huge fluffy-feathered fans. And Sparkly Devil, who competed in the Burlesque Hall of Fame’s 2011 Tournament of Tease this year, performed her world-class dance.

Over in Europe, the most prominent purveyor of electro swing is a French group called Caravan Palace. Other big names include The Correspondents and Nick Hollywood, who brought Noir to the forefront by including him on his White Mink: Black Cotton compilation. But it’s Noir and other Bay Area DJs, including TechnoBrat and Aaron Delachaux, who are simmering their own spin on electro swing by adding hip-hop and trip-hop beats. Noir is working on a West Coast compilation, and hopes to collaborate with a seven-piece San Francisco swing band called Slim Jenkins.

For a taste of what BoomSwing looks and sounds like, here’s Caravan Palace:

This Caravan clip is pretty fun, too.