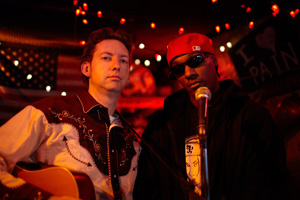 You’ve heard songs from hip hop artists who sample other musical genres: From the unfortunate evolution of rap metal (think Papa Roach) to Danger Mouse’s controversial and crafty mashup of Jay-Z and The Beatles, the practice of intertwining multiple musical roots is widespread in hip hop. You may have also heard bands who reappropriate rap tracks and perform them in their own genres, like The Gourds’ popular country version of Snoop Dog’s “Gin and Juice.” Then there’s the surprising collage of hip hop and bluegrass music: Gangstagrass, an experiment that proves, at least to me, that hillbillies and emcees can get along swimmingly.

Though The Bluegrass Blog warns that the genre is “not for you purists,” Gangstagrass nevertheless manages to win over some people who dislike both bluegrass and rap. The amalgamation is the brainchild of Rench, a singer/songwriter who grew up with honky-tonk and now resides in Brooklyn. Rench began experimenting with mixing rap and country songs more than 10 years ago, but he noticed how the sparse percussion in bluegrass music made the genre even more compatible with the heavy beats of hip hop. He pulled out tracks from rappers he had been recording with, layered them over bluegrass samples and created the first CD of the project, called Gangstagrass, in 2008.

This year, he produced another album featuring rapper T.O.N.E-z, called Lightning on the Strings, Thunder on the Mic. Rench’s second album also includes Brooklyn’s underground emcee Tomasia rapping about a coal-mining grandfather as well as an impressive array of bluegrass instrumentalists and vocalists. Take Jason Cade, the fiddler, who has toured with all sorts of old-time and traditional Irish brigades (and teaches law at NYU during the day). Singer Jen Larson co-founded the traditional bluegrass ensemble Straight Drive and has performed on A Prairie Home Companion and at Carnegie Hall.

Rench has begun to garner attention for his eclectic effort. He and T.O.N.E-z’s song “Long Hard Times To Come” became the theme song for the TV series Justified, and it recently nabbed an Emmy nomination for Outstanding Original Main Title Theme Music. (Judging from the competition, it deserves to win.)

Lightning on the Strings, Thunder on the Mic presents ten tight tracks. “I Go Hard” and “Trouble Wherever I Go” are two strong examples of how the project melds two musical strains together to form a stronger whole. “Click Ol Gun” and “My Enemies Lay Beneath the Prairie” feature stirring banjo playing, soaring fiddle, and the increasingly rapid rhythm of the snare drum. Gangstagrass adeptly layers rap lyrics over strong emotional accents from the instruments, something most DJs can’t take advantage of when sampling electronica music. You can hear it in “Nobody Gonna Miss Me;” the skillful slide on the guitar and winsome lines from the fiddle fill in the background of the rap with a bluesy, remorseful tone. You almost feel sympathy for T.O.N.E-z when he whines, 90 percent of the chicks I dealt with were floozies.

Alas, some of the qualities that bug me about regular gangsta rap also irritated me while listening to Gangstagrass. At the end of the day, two guys singing about guns just doesn’t prove much. Neither does the macho need to one-up everyone else on tracks like “That’s Right I’m Good” and “I’m Going to Put You Down.”

Annoying machismo aside, though, Gangstagrass is worth a listen. As unexpected as the fusion may be, it makes sense, argues Rench in his Bluegrass Blog interview: “America is not as musically segregated as we may lead ourselves to believe—there are a lot of ipods with Jay-Z and Johnny Cash in the same playlist out there. My audience is the folks that appreciate American music in many forms.”

Fond of the fiddle/rap combo? Several violinists collaborate with rappers or infuse hip hop beats into their compositions. Some hip hop hybrids to check out: