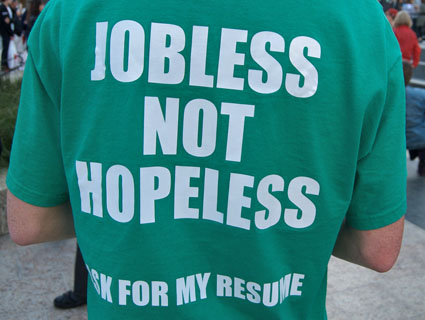 Last week was Erin’s 31st birthday. When I asked her what her husband, Anthony, got her, she said, “Not a damn thing, I’d imagine, since we might be about to be a single-income family.” She was wrong: Like on Mother’s Day, he came home armed with presents.

The next day, Anthony called. His employer, the Ohio Consumers’ Counsel, which is slated to have its finances reduced by as much as half in Governor John Kasich’s budget, had given him notice. His job ends on June 30.

“What are we gonna do, monkey?” Erin asked their toddler, Jocelyn, as she sank to the floor, sighing. “I’m going to have to start entering you in pageants.” Her face brightened a little when she turned to me. “I watched Toddlers & Tiaras for the first time today. I don’t know why I haven’t done that. Except that it smacks of child abuse.”

Jeff Robek has some better advice. Yesterday, I watched the Ohio State University career advisor deliver a whole PowerPoint deck full of advice on career exploration. He was talking to a conference room in the downtown Columbus Metropolitan Library, which invited him as part of its Job Help Center. Staff and volunteers help job-seekers with everything from the very basics—email training, online-application navigating—to workshops for professionals. CML’s website is the second most-visited in the whole county. Within the site, the Job Help Center page is the most-visited page. (It’s not clear how those services will be affected after the new budget passes, since libraries are also in line for a big cut.)

“A lot of the people I’m working with have been laid off or find their field is shrinking,” Robek told the assembled audience. The other big demographic? “I work with a lot of older job-seekers. Fifty-plus, sixty-plus.” (OSU career advising is available not just to alumni but to anyone in the community.) Robek—who is perfectly Midwestern, with khakis and friendliness and neat hair—taught me the term “encore career,” which appears to be a euphemism for “professionals who are old but can’t afford to retire.” He pointed us toward a lot of websites that list jobs, that allow you to research possible careers, and that have stats about jobs, like which ones are supposedly in a growth period. “With the job market as tight as it is right now, employers are picky,” he cautioned.

The fact that it’s a hirer’s market is stunting Anthony’s job search. He had an interview on Friday, his first one so far, though he’s got years of experience and has been applying for dozens of jobs, for weeks. He was fortunate to make it into those who got interviewed out of the 150 who applied, but he’s still up against 11 other contenders. He wore a purple shirt, to stand out, and because he doesn’t like to be “bland.” Though he has his fingers crossed, he’s not counting on that position.

At night, after work, he was still working on his communications portfolio and putting in more applications. According to Robek, the odds aren’t awesome; his last slide said that only 14 percent of people land a position through advertised jobs. Seventy percent of jobs come from networking, 11 percent through staffing agencies, and 5 percent through sending resumes. “I’m making a portfolio so I can use it on interviews,” Anthony said with a toothy smile as he picked up a piece of it Jocelyn had thrown on the floor. “If I ever get one.”

Plus: For much more on our “work more, earn less” economy, including the jobless recovery, see our current package on The Great Speedup.