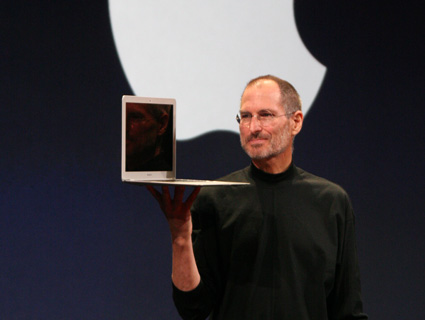 Apple CEO Steve Jobs has a talent for theatrics. Whenever he unveils Apple’s latest gadget, Jobs puts on a Messianic persona, or at least the booming voice behind the Wizard of Oz (see: Jobs revealing the iPad as if it were the Ten Commandments). Jobs showcased the iCloud at the World Wide Developers Conference on Monday in San Francisco, but proposed Apple’s new headquarters to a much smaller audience: the Cupertino City Council.

Jobs debuted a slide show of the donut-shaped building on Tuesday, causing at least one council member to crack a UFO-related joke. Yes, true to Apple’s usual blend of sci-fi and whimsy, the building does resemble a cross between a breakfast treat and a spacecraft. The campus is massive. With four stories above ground, a four-level underground garage, and enough square feet to house 12,000 workers, the mother ship almost justifies the ethereal light Jobs uses in his slide shows. Almost. See for yourself below.

-In a bout of humility, Jobs opens with: “Apple’s grown like a weed.”
-At 5:10, heavenly light splashes upon the HQ’s rounded glass, supposedly the “biggest pieces of glass in the world for architectural use,” Jobs said. A patch of California poppies are thrown in for eco-friendly measure.
-Just after 11 minutes in, you’ll hear Jobs say, “As you know, we’re the largest taxpayer in Cupertino.” (hint, hint, nudge, nudge, don’t make us move to Mountain View! We’ll do it!).

Jobs also mentions that he’s hired Stanford University’s senior arborist to make the campus (which Apple bought from Hewlett-Packard) 80 percent landscaped. Just how eco-friendly will this campus be? That remains to be seen. But in Jobs’ presentation of the 2015 headquarters, the poppies are already bobbing in the soft Cupertino breeze.