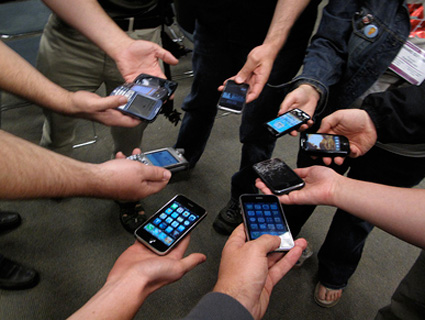 While mainstream media news cycles have been dominated by political sex scandals, important global stories have gone under-reported. According to AlterNet’s Rania Khalek, many of these stories were broken by WikiLeaks. Khalek spotlights five key revelations of 2011, including:

This startling information, Khalek concludes, is “just the tip of the iceberg.” Yet, apart from The Nation, which is running a series on the Haitian cables–read it here and here–these stories “have received little attention in the US press.”

Over the past 15 years, numerous federal deregulatory actions have paved the way for unprecedented consolidation, which has severely impacted both competition and diversity. It all started with the Telecommunications Act of 1996, and the Federal Communication Commission (FCC) has been at the epicenter.

In the current climate, any further consolidation—such as the proposed AT&T/T-Mobile and Microsoft/Skype mergers—could affect consumers in drastic ways. Yet without legal intervention, we might be headed for a new era of massive media consolidation.

As Truthout’s Nadia Prupis writes, in 2007, the FCC “loosened the restrictions on a 35-year-old ban on newspaper-broadcast cross-ownership, giving new allowance for a single company to buy and operate both a major newspaper and a radio or TV station in the same market.” If the new cross-ownership rules are upheld, there would be nothing stopping a single media company from owning an unlimited number of radio, TV, and print media outlets in the same market—a move that could effectively gut the notion of a free, independent press, as well as any separation between giant media conglomerates.

Last February, a coalition of media advocacy groups (including Prometheus Radio Project, Media Alliance, Media Access Project, and Free Press) challenged the FCC in the Third Circuit Court of Appeals. Among their concerns, Prupis notes: “loopholes in the commission’s rules could allow newspapers to own TV stations of any size” and “media consolidation could prevent an increase in minority-owned stations and stifle the creation of local news programs.”

The FCC’s Media Ownership review was expected June 6, but it appears to have been delayed indefinitely. Commissioner Robert McDowell said it would be “awkward” for the FCC to rule prior to the outcome of the court’s decision. McDowell has been a proponent of further deregulation, which he believes could prop up the flagging newspaper industry.

The FCC Kills the Fairness Doctrine—Again

“How many times does it take to kill a federal rule before it’s really dead?,” wonders Mother Jones‘ Stephanie Mencimer. The rule in question is the “Fairness Doctrine,” a Truman-era policy enforced by the FCC “to ensure broadcasters presented balanced views in their coverage of controversial subjects.”

The policy was abolished in 1987, but conservatives have feared it would be resurrected by the Obama administration and liberal Democrats. No worries, according to FCC Chairman Julius Genachowski, who stated he fully supports “deleting the Fairness Doctrine and related provisions from the Code of Federal Regulations.”

The AT&T/T-Mobile merger continues to be a much-discussed topic in both media and regulatory circles. As Truthout’s Prupis reports, Sprint and media advocacy group Free Press have separately filed “Petition to Deny” papers with the FCC, arguing that approval of the $39 billion deal would lead to higher prices and fewer choices and doesn’t serve the public’s interest. AT&T denied the allegations, calling the opponents “the usual suspects.”

In other AT&T/T-Mobile-related news, Media Alliance Executive Director Tracy Rosenberg wrote about a recent California Public Utilities Commission hearing on the merger for Oakland Local. Despite Rosenberg being outnumbered by shills from “Astroturf” organizations, the commission voted to investigate the deal, signaling that concerns over its impact are serious enough not to simply rubber-stamp it.

Finally, AlterNet’s David Rosen and Bruce Kushnick debunk myths AT&T has been perpetuating about broadband, including:

The collusion between news organizations and partisan political groups has resulted in some eyebrow-raising partnerships, and raised questions about whether the mainstream media is truly fair, balanced—and unbiased.

The Nation Institute and AlterNet recently published an article about Wall Street Journal editorial board member Stephen Moore’s questionable affiliations with right-wing activists. Adele Stan reports, “The paper is matched only by Fox News in its unabashed alliance with political advocacy organizations associated with Charles and David Koch, the billionaire brothers and noted conservative funders who run Koch Industries, the second-largest privately held corporation in the United States.”

Moore has been profiting handsomely from speaking at events organized by Americans For Prosperity and other conservative groups, which raises ethical concerns, Stan writes: “Moore’s involvement with such a blatantly political organization—one whose agenda aligns so obviously with that of the GOP—is an anomaly for an editorial board member of a national newspaper.”

The WSJ and Fox aren’t the only MSM outlets with questionable ties to the private sector. Speaking on Democracy Now, legendary journalist Bill Moyers points to relationship between defense contractor General Electric and television network NBC—which broadcasts political commentary show “Meet the Press”—as an example of “the consensual seduction of the mainstream media.” He calls this “one of the most dangerous toxins at work in America today.”

Moyers goes on to say that “The intimate relationship intertwining “mainstream media with power, corporate power, government power… is something that, without the antidote of independent reporting and analysis… we would be in a dark, dark pit with no light shining on us.”

This post features links to the best independent, progressive reporting about media policy and media-related matters by members of The Media Consortium. It is free to reprint. To read more of the Wavelength, click here. You can also follow us on Twitter.