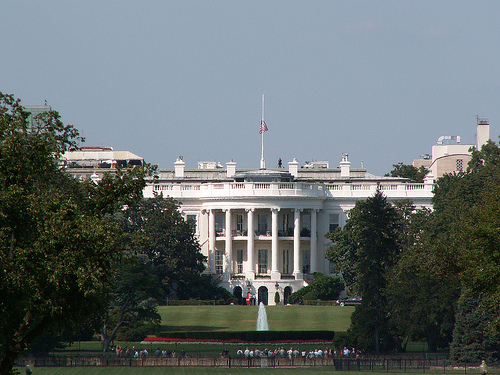 Last fall, after a persistent campaign by enviros, the Obama administration agreed to install solar panels on the roof of the White House. In response to the request from 350.org, Energy Secretary Steven Chu promised that solar panels and a solar hot water heater would grace the roof of the First Family’s residence “by the end of this spring.” But today’s the first day of summer, and there’s still no solar.

350 wonders what exactly the hold-up is. “This was a no-brainer—the Republicans couldn’t filibuster it, the oil companies weren’t fighting it, and it still didn’t get done when they said it would,” said 350 founder Bill McKibben in a statement.

The administration responded Monday night, promising that the solar panels are still coming. Ramamoorthy Ramesh, director of solar energy technologies at the Department of Energy, wrote in a long blog post:

The Energy Department remains on the path to complete the White House solar demonstration project, in keeping with our commitment, and we look forward to sharing more information—including additional details on the timing of this project—after the competitive procurement process is completed.

In short: the fate of the White House’s solar panels is still cloudy.