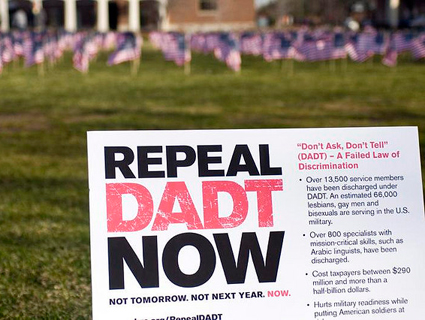 [UPDATES: For the latest developments, scroll to the bottom.]

On Friday, Secretary of Defense Leon Panetta and the Joint Chiefs of Staff will announce that they’re ready to integrate openly gay and lesbian Americans into the armed forces, paving the way for President Obama to end Don’t Ask, Don’t Tell once and for all.

Since last December, when Obama and the lame-duck Democratic Congress passed legislation to repeal DADT, the ball’s been in the Pentagon’s court: The defense secretary and the chairman of the Joint Chiefs were tasked with studying the effects of DADT repeal and certifying to the president that yes, it could be done. Once that were to happen, the president could certify their results, and 60 days later, uniformed service would be open to all. “The troops and their commanders are ready. Our nation’s top military leaders have testified that commanders see no significant challenges ahead,” Aubrey Sarvis, executive director of the anti-discrimination Servicemembers Legal Defense Network, said in a statement Thursday night. “The official certification to Congress that the armed forces are prepared for the end of ‘Don’t Ask, Don’t Tell’ should go to Capitol Hill tomorrow with the President’s signature.”

Now it’s happening, against the wishes of conservatives. As late as this spring, Republicans in the House pursued a laundry list of measures to put the brakes on the military’s repeal certification. At the same time, a parallel fight over DADT broke out in the federal courts: A group of conservative gays, Log Cabin Republicans, bucked their party brethren to challenge the Pentagon’s discriminatory policy. Their suit was joined by dozens of others. That put Obama’s Justice Department in the uncomfortable position of defending DADT in the courts so the policy could die a slower death at the hands of his generals.

If all goes according to plan and Obama signs off on the military’s recommendations soon, openly gay and lesbian cadets could walk the halls of the service academies and college ROTC barracks. They could serve downrange in Iraq and Afghanistan. They’re already there, of course; now, they simply won’t have to conceal their identities.

Reaction from anti-DADT activists was surprisingly muted Thursday evening. “The timing of this announcement is in line with our expectations about Secretary Panetta waiting to settle into his new position at the Pentagon, surveying the landscape, and seeking feedback from his chiefs and commanders before making a move on certification,” Alexander Nicholson, the executive director of the pro-LGBT-vets group Servicemembers United, said in a statement. “We are glad to see that just three weeks into his tenure as Secretary of Defense, he is already confident that this policy change can take place with little or no disruption to military readiness.”

We’ve covered the plight of gays in the military closely over the past few years, from West Point to Virginia to the cockpit of a fighter jet to the Army’s retention offices. And as this story develops in the coming hours, Mother Jones will continue to bring you all the latest news.

UPDATE 1, 12:06 p.m. EDT: Conservative reactions to the anticipated repeal are rolling in. Sen. Kay Bailey Hutchison (R-Texas) tells MSNBC, “I really don’t think we should be putting people who are in harm’s way, in very close quarters, in any kind of uncomfortable position.” Of course, being in harm’s way is, itself, a kind of uncomfortable position. (See video below.)

Elaine Donnelly, a social conservative who runs the anti-gay Center for Military Readiness out of a post office box near her Livonia, Michigan, home, has the money quote of the day: “On the day that President Obama signs a paper ‘certifying’ that no harm will come to the military when repeal is implemented,” she says, “he will own the San Francisco Military that he has created.”

There’s been no word from American Family Association spokesman Bryan J. Fischer, but yesterday he did call gays “Nazis” who resort to calling their opponents Nazis. This came on the heels of his assertion that Hitler and most of his SS stormtroopers were gay.

I am trying to picture how that first day after repeal will look. I am usually a very calculated person when it comes to matters like this, so I am working on my game plan. Right now I am thinking it will start out pretty normal, and as soon as someone asks me what I did over the weekend, for once it won’t be a lie or a half truth. It will probably be something to the effect of “my boyfriend and I went out and did X,Y,Z.”

Lucky for me, I still have 60 days to figure out the details.

UPDATE 3, 2:10 p.m. EDT: The integration of gays in the military could have a secondary effect on the composition of the armed forces: Vermont Law School announced today in an email statement that it will rekindle its relationship with military recruiters, banned from campus since 1985, in the wake of the Pentagon’s DADT repeal certification. VLS’s change of heart follows recent decisions by such schools as Harvard and Columbia to restore long-banned ROTC programs and on-campus military recruiting. As prestigious liberal arts colleges forge closer ties with military recruiters, the services’ officer corps could see an unusual influx of broadly educated, nonconformist, politically liberal talent.

An excerpt from the VLS announcement:

VLS, which denied access to military recruiters for more than 25 years because “don’t ask, don’t tell” conflicts with the school’s nondiscrimination policy, notified the U.S. Department of Defense on Tuesday, July 19, that its recruiters are welcome back on campus effective immediately.

“This law school has stood fast to our position of principle, in the face of significant pressure, to insist that the ‘don’t ask don’t tell’ law be repealed,” Dean Jeff Shields said. “That day is finally here.”

UPDATE 4, 2:30 p.m. EDT: The Pentagon-sponsored military newspaper Stars and Stripes has collected reactions to the DADT repeal from soldiers deployed in Afghanistan:

“As long as everyone does their job, it’s cool,” he said. “There hasn’t been a lot of talk about it (certification). People are people, and we all have a lot of work to do.”

At FOB Airborne in Wardak province, soldiers said they were not concerned about the changes.

“I’m not homophobic,” said Pvt. 1st Class Westley Degree, 21. “As long as they’re out there slinging bullets with me, I don’t care.”

Sgt. Ralph Nichols, 31, was more blunt: “As long as he don’t try nothin’ on me, bring him downrange.”

Michael Keegan, president of People for the American Way, was less equivocal in his praise of the end of DADT: “This day has been a long time coming. Under Don’t Ask, Don’t Tell, thousands of brave men and women have been forced out of the military or prevented from serving their country at all, simply because of who they are and who they love. That’s not the kind of country the United States is.”