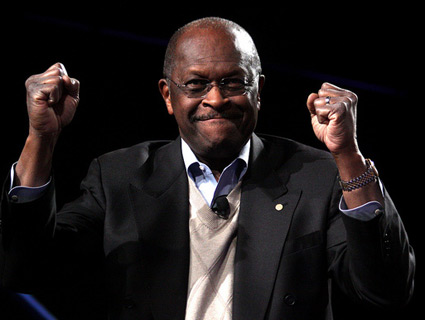 GOP presidential candidate Herman Cain wants you to believe that he is a dyed-in-the-wool fiscal conservative and a savvy businessman who can rescue a nation drowning in red ink. Cain points to his years in corporate America, where he rescued companies such as Godfather’s Pizza that were hemorrhaging cash and employees, as proof of his business bona fides. “Serious but responsible belt-tightening can save businesses,” his website reads, “and it can also save our country with the right leadership.” That message, however, is on a collision course with Cain’s own spending habits, which include $900-a-night hotels, five-figure private-jet rides, and chauffeurs awaiting him when he arrives in the next city on his uphill climb toward the White House.

A Mother Jones analysis of the latest federal campaign filings found that Cain’s presidential committee, Friends of Herman Cain, spent $448,000 on air travel in the first half of 2011. That comes out to nearly $2,500 a day. And when it came to hotels, Cain’s operation doled out nearly $100,000 in the first half of the year—or $538 a day—on some of swankiest hotels in America.

Cain has spent less than his biggest rivals this election cycle—his $2.1 million trails Tim Pawlenty’s $2.5 million and Mitt Romney’s $5.6 million. But what separates Pawlenty and Romney is that their campaigns spend within their means, raising far more—Romney $17.1 million and Pawlenty $4 million—than they spend. Cain, on the other hand, contradicts his own fiscal responsibility message: His spending has outpaced his fundraising haul by nearly $43,000. (He’s in the black if you include the $500,000 loan Cain made to his campaign in his haul.)

And a review of campaign records shows that none of the other GOP candidates—with the exception of Newt Gingrich, who owes $452,000 for private-jet fees—has quite the same penchant for Ritz Carltons and chauffeurs that Cain does.

Cain and his team stayed in modest hotels in places such as Concord, New Hampshire, and Sioux City, Iowa, but records show the campaign also checked into the kinds of palatial digs affordable only to America’s richest travelers. On a single day in late January, Cain’s outfit spent $7,538 at the Wynn Encore hotel on the Las Vegas Strip, where the accommodations range from 700-square-foot suites with bathroom TVs and panoramic views of downtown Las Vegas to 2,261-square-foot apartment-style salons with private massage and powder rooms.

But Cain’s hotel high rolling pales in comparison to his committee’s spending on air travel. At a rate of $2,473 a day, Friends of Herman Cain spent more on flying costs in two weeks than a middle-of-the-road American household earns in an entire year. And while plenty of that money went to commercial airlines, Cain’s committee also doled out well over $100,000 to charter private jets in Georgia and Wisconsin.

Often, when Cain and his team arrived at their destination, a chauffeur would be waiting to whisk them off to wherever they had to go. Campaign records show that Friends of Herman Cain made 21 different payments totaling $8,138 to RMA Worldwide Chauffeured Transportation, a high-end limo service based in Rockville, Maryland, 20 miles outside of Washington, DC.

That’s to say nothing of the handful of questionable expenses made by Cain’s committee. For instance, Friends of Herman Cain paid Samuel Wurzelbacher, a.k.a. “Joe the Plumber,” $10,000 for campaign events, despite the fact that Wurzelbacher’s flash of fame has long since past. The committee also paid $6,900 in “entertainment” fees to Krista Branch, a former American Idol contestant who is known, if at all, for her tea-party-themed song “I Am America.”

While Cain’s campaign did not respond to a request for comment, he would likely respond to criticisms of his spending by pointing to his 50-state strategy, adding that trying to compete from one coast to the other requires plenty of travel. Cain—who placed first in a recent Nevada straw poll and fourth in a recent Public Policy Polling national survey, ahead of Ron Paul, Newt Gingrich, Tim Pawlenty, and Jon Huntsman—predicted on Fox News recently that he’d place third in the Ames Straw Poll in Iowa next month, a key campaign event that can make or break a candidate’s chances in Iowa’s January caucuses. And even if he didn’t place well in Ames, Cain planned to fight on. “The nomination process doesn’t stop with the early caucuses only,” Cain explained. “There are a lot of other states on the back-end of the process that could swing it from where it starts out.”

Cain’s big spending has raised questions in the minds of some Republican politicos. Craig Robinson, the former political director of the Iowa Republican Party, wrote on his site IowaRepublican.com that Cain’s high rolling—which Cain himself has said is part of his 50-state strategy—could ultimately lead to his demise as a presidential contender. “Cain is running on a ‘Common Sense Solutions’ platform and claims that his business experience gives him an edge over the rest of the field,” Robinson said. “If Cain’s campaign was being run like a business, it might be on the verge of bankruptcy.”