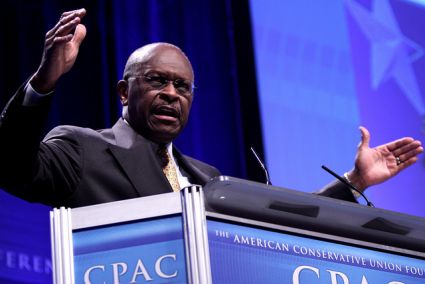 What GOP presidential contender Herman Cain lacks in political experience, he likes to say, he makes up for with decades’ worth of success in corporate America. He climbed the corporate ladder at the Pillsbury Company, chaired the Federal Reserve Bank of Kansas City, and rescued the failing Godfather’s Pizza franchise. That business-centric message has won Cain his share of admirers: a focus group convened after a recent Fox News presidential debate overwhelmingly declared Cain the winner.

“I think that over 40 years of business experience is resonating a lot more with people than simply having political experience,” he said on a recent Iowa visit. “Knowing how Washington works isn’t necessarily an advantage. As a businessman going in, I don’t want to know how Washington works. I want to change Washington D.C. and so by not knowing how it is supposed to work I can ask tough questions that will help change the culture.”

Cain clearly believes that his pro-business message is what GOP voters want to hear. So much so, in fact, that on Saturday he officially unveiled his candidacy for the 2012 GOP nomination. But scrubbed from Cain’s official story is his long tenure as a director at a Midwest energy corporation named Aquila that, like the infamous Enron Corporation, recklessly dove into the wild west of energy trading and speculation—and ultimately screwed its employees out of tens of millions of dollars.

According to five lawsuits filed in federal court in 2004, Aquila’s board of directors—which Cain joined in 1992—allegedly steered employees into heavily investing their retirement savings in company stock. At the same time, the company shifted its business model from straightforward energy generation to risky energy trading, an unregulated market made infamous by now-defunct Enron. The suits, later folded into a single, massive class action (PDF), alleged that Cain and top company officials violated a 37-year-old federal law requiring that employers manage employees retirement programs responsibly. (Cain’s presidential exploratory committee did not respond to a request for comment.)

Founded in 1917 as Green Light and Power, Aquila traditionally made its money operating electric and gas plants and selling the energy they produced. In the years after Cain joined the board, Aquila’s earnings climbed, from $254 million in 1995 to $351 million in 1998. Then, in early 1999, the company’s leadership decided running power plants wasn’t lucrative enough; energy trading and speculation had grown popular, and as the class suit lays out, Aquila wanted a piece of the action.

It was a dangerous move—as a company spokesman later put it, “the risk was huge.” In the end, it proved disastrous. Aquila’s decision to join Enron, Reliant Energy, and the other heavy-hitters in the energy trading markets would ultimately wipe out 94 percent of Aquila’s stock value between 1999 and 2004. The company also faced criticism for using some of the same trading tricks that Enron did as a way to puff up its stock price, the lawsuit says. That included using “roundtrip” trades, a scheme in which Aquila would sell a trading partner some energy and then that partner would sell the same amount back to Aquila, a deal that canceled itself out. In the end, nothing actually changed hands. But it boosted Aquila’s trading volume and revenue, sending a positive signal to the markets. The company also engaged in megawatt laundering, or “ricochet” trading, the lawsuit alleges. In such transactions, Aquila and other companies would buy energy from California at a lower capped price, move that energy out of the state, then re-sell it back to California at a higher price for a tidy profit.

But this financial trickery couldn’t save a listing ship. In 2002, Aquila teetered on the brink of collapse. And for Aquila’s employees, the result of the company’s foray into energy trading was devastating: The company’s employee retirement fund, overseen by the board of directors, lost more than $200 million in 2002. The reason: At the same time Aquila’s executives and directors were investing more and more in highly risky energy speculation, they were selling their employees on the conservative nature of Aquila and pushing them to invest their retirement savings in company stock.

For years, the lawsuit says, executives urged employees in company speeches to reinvest in Aquila, lauded those who did so as “Aquila partners,” and even offered a 15 percent discount to buy company stock. Executives and board members also made it more difficult to sell off company stock by implementing lock-up periods, during which employees couldn’t cash in their holdings. At the end of 2000, 85 percent of Aquila employees owned common stock in the company. What’s more, 60 percent of the employees’ retirement fund consisted of Aquila stock—even though financial experts say that total should never be more than 10 to 20 percent.

The spectacular failure of Aquila’s trading venture practically wiped out the hard-earned retirement savings of veteran employees. Richard Itteilag, a plaintiff in the Aquila class action, lost 87 percent of his savings. Robert Goodson, a 20-year Aquila employee, lost 75 percent. Michael Reinhardt lost a staggering 94 percent. All told, thousands of employees saw their retirement funds eviscerated thanks to Aquila’s Enron-esque activities. (In 2007, Aquila settled with the employees for $10.5 million. Not long after, Aquila merged with other Midwestern energy companies and now no longer operates as Aquila.)

Cain served on the board of directors throughout Aquila’s ill-fated trading misadventure and the subsequent collapse of the company’s retirement fund. In fact, he chaired the board’s compensation committee, which, according to the lawsuit, had direct oversight of the push to get employees to invest more and more in Aquila stock. As chair of the compensation committee, Cain also saw fit to dole out $30 million in bonuses, not including stock options, to the top five execs at Aquila in 2002, with the company’s stock plummeting. A month after the Kansas City Star reported on the hefty bonuses in July 2002, the company laid off 500 employees, and the losses to employees holding company stock had reached hundreds of millions of dollars.

As a board member, Cain would’ve had direct knowledge of Aquila’s activities, says Fred Taylor Isquith, a New York attorney who litigated the employee class action. Asked if it was fair to place blame on Cain for the debacle at Aquila, Isquith replied, “Yes, I believe it is.”