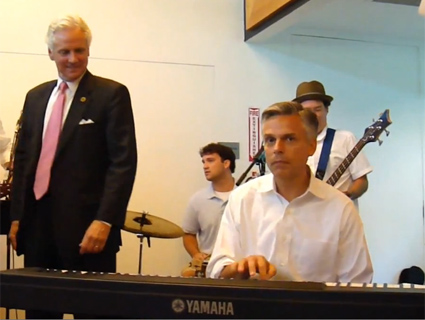 We’re still months away from the first meaningful votes in the GOP presidential primary, and a full 14 months away from 2012 election. But it’s never too early to start scrutinizing the field. We’ve written pretty extensively on the various candidates’ views on gay marriage, civil liberties, foreign policy, and (most notably) the economy. But in our effort to leave no stone unturned, we got to thinking: Where do the presidential contenders stand on music?

Here’s an incomplete guide to their musical careers, their tastes, and the bizarre music they’ve inspired:

Jon Huntsman, keyboard: When Jon Huntsman was 18 years old, he dropped out of high school to join a prog rock band called Wizard. It was only a matter of time; Politico talked to a former classmate who “recalled the long-haired, diffident Salt Lake City high schooler sitting next to him in history class ‘hitting his desk as if it were a piano.'” Now, watching the former Utah governor and US ambassador to China slog through a Republican primary that doesn’t seem to have a place for him, you almost get the impression he’s secretly plotting to ditch the campaign thing entirely and get the band back together.

As governor, Huntsman jammed with REO Speedwagon and pushed through the oh-so-very punk rock reform of relaxing the state’s liquor laws. When he’s not busy alienating conservatives with his recognition of evolution and man-made climate change, he has also taken the time to tweet his affection for Captain Beefheart and regaled voters with impromptu performances. Here he is playing the Charlie Brown theme song at a music store in Manchester, New Hampshire. And here he is performing “Hit the Road Jack” with Rep. Tim Scott (R-S.C.) and the state’s former attorney general, Henry McMaster:

Michele Bachmann (none): The Iowa Straw Poll winner likes to take the stage at campaign rallies to Elvis, and she recently wished the singer happy birthday on the anniversary of his death. In one of the more inane moments in recent campaign history (which is saying something), she responded to a “this or that” debate question pitting Elvis against Johnny Cash by noting that she likes both but keeps “Christmas with Elvis” on her iPod. So thank you for that, CNN. Bachmann told CBN’s David Brody in June, “I looove Johann Sebastian Bach,” but if she could attend one concert for any performer, living or dead, she’d go a different route: “I guess I’d have to go to Bachman–Turner Overdrive, because my favorite song is ‘Taking Care of Business.'” It might as well be her campaign slogan.

One performer Bachmann does not like? Elton John. As a Minnesota state senator, she warned that Disney’s The Lion King was corrupting school children because of the openly gay British pop icon’s involvement. The film, she contended, was sending children the dangerous message that being gay leads to success in life. Her homophobia inspired this song from Minneapolis musician Maria Isa, who went to high school with one of Bachmann’s sons:

Newt Gingrich, patron: Gingrich does not play any instruments himself, but he caused a minor incident back in May when it was revealed that his phone’s ring tone was “Dancing Queen” by ABBA. As he explained at the time, “When they do ‘Dancing Queen’ in the movie [Mamma Mia], it’s just fun. I love that sequence. The energy. The excitement.” The outfits. Witness:

When he wants to make an entrance, though, Gingrich usually chooses “Eye of the Tiger.” Callista Gingrich, Newt’s third wife, is an accomplished French horn player and vocalist (with the choir of the Basilica of the National Shrine of the Immaculate Conception). In a recent piece about the campaign’s many problems, the Los Angeles Times reported that Callista’s instrument’s hard case makes it difficult for the couple to fly commercial. As Speaker, Gingrich also took a stand against rap music.

Herman Cain, vocals: The former Godfathers Pizza CEO and occasional First Amendment watchdog is the only candidate with his own album, a gospel record called Sunday Morning. And it’s really not so bad, if you’re into that kind of thing:

Rick Perry, drums and piano: At George W. Bush’s inaugural ball in 2005, Perry performed on stage with ZZ Top. Take a few minutes to soak in this photo. He’s also good friends with Detroit’s own Ted Nugent—the Detroit rocker and proud tea partier who once said that Barack Obama could “suck on my machine gun.” (In a recent visit to San Francisco, meanwhile, he joked about eating tiger dick.) In June, Nugent authored a Washington Times op-ed calling for Perry to run for president, but their most memorable connection came back in 2007, when Nugent performed at a party for Perry after he was sworn in to a second full term. As the Austin Chronicle reported, Nugent showed up wearing a t-shirt emblazoned with the Confederate flag, cracked a few jokes about Mexican immigrants, and used the opportunity to rail against gay marriage. (Or as he put it, “faggots getting hitched.”) Nugent and Petty have also gone hunting together. Here’s a photo of them standing behind a giant turkey. And here’s a weird song someone on YouTube wrote for Perry:

Perry met his wife, Anita, while taking piano lessons when he was eight years old; this photo, which will not appear in any campaign ads, is proof that he’s still got the fire if not the form. The Twitter handle Rick Perry Facts, meanwhile, helpfully notes that the governor “[c]an play violin. With a piano.”

Mitt Romney, vocals: When President Obama’s reelection campaign goes about trying to cast the former Massachusetts governor as “weird,” this clip of Romney singing the chorus from the Baha Men’s “Who Let the Dogs Out?” is clearly what they’re talking about. In fairness, this video is weird:

Ron Paul, muse: The Texas congressman doesn’t make music, he inspires it. No presidential candidate in recent history—present commander in chief included—has spawned as many DIY YouTube odes, and it’s not even close. Pick a genre: Country? Here. Boogie Boogie? Check. Rap? Got it. Reggae? Click! Ron Paul songs have become such a thing that his main fan site even has a web page devoted entirely to them. So anyway, here’s a pretty good one, appropriately called “Ron Paul Punk Rock Anthem”:

Thad McCotter, guitar: Back in 2007, when Mike Huckabee was still a little-known former governor most famous for having lost a ton of weight, he won over crowds (or at least the media) by playing the bass with his band, Capitol Offense. McCotter, a little-known Michigan congressman, seems to be taking the same approach—but the crowds just haven’t materialized. Here he is rocking out with his band, The Second Amendments, at Farm Aid:

Sarah Palin, flute: Once upon a time, the former Alaska governor (who has not yet entered the race) was a contestant in the 1984 Miss Alaska pageant, where she played the flute in the skills competition. Her chosen selection was an arrangement from her favorite artist, “James Galway,” whom we’ve never heard of either. Watch:

Palin’s musical acumen extends beyond neoclassical arrangements, however. When President Obama invited the hip-hop artist Common to the White House, she blasted the decision, but insisted that not all rap is crap: “I know the lyrics to ‘Rapper’s Delight.'”

Bonus Failed Candidate—Tim Pawlenty: Like everything else, Tim Pawlenty failed to distinguish himself with his musical tastes. His favorite Lady Gaga song was “Bad Romance.” He liked pop countryzzzzzzzzzz. But did you know he went to high school in South St. Paul with Grant Hart of Husker Dü? It trü! Here’s what Hart told Minneapolis City Pages in 2004:

When I think of the crowd Pawlenty ran with, it was the high school equivalent of, you know, Grunseths. I mean, kids that weren’t in and of themselves bad kids, but kids who automatically made the A squad. The very, very privileged of the town. I was working at Cheapo [Records] at the time, and bringing my amp and guitar and record player to parties. Guys would go, “Is this the new Aerosmith?” And I’d say, “No, it’s the New York Dolls.” I would say that Tim was probably into whatever music swung with the crowd he was trying to impress. He probably had never been to an arena concert, at a time when you could see eight bands for four bucks, but I don’t know.

That’s the funny thing: I knew the guy for years, and it’s still like he’s a cipher. He’s Chauncey Gardener. With a lot less Zen. You know, I’d vote for Chauncey.

Anyways, here’s Pawlenty talking about Gaga, and acknowledging that “If you had to limit your artistic choices to just conservatives, we wouldn’t have a lot of choices.” Which is sad: