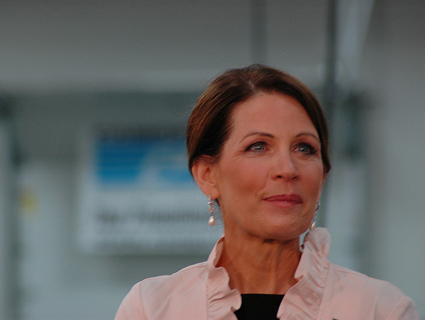 For Michele Bachmann, there are a lot of things Americans should be afraid of—efficient lighting, public schools, the gays, just to name three. And in an appearance on Jay Sekulow’s radio show on Thursday, the insurgent Republican presidential contender argued that Americans should also be afraid of the revenge of the Soviet Union.

Via Right Wing Watch, here’s the pertinent portion of the interview:

I would say it’s a unified message. It really is about jobs and the economy. That doesn’t mean people haven’t [sic] forgotten about protecting life and marriage and the sanctity of the family. People are very concerned about that as well. But what people recognize is that there’s a fear that the United States is in an unstoppable decline. They see the rise of China, the rise of India, the rise of the Soviet Union and our loss militarily going forward. And especially with this very bad debt ceiling bill, what we have done is given a favor to President Obama and the first thing he’ll whack is five hundred billion out of the military defense at a time when we’re fighting three wars. People recognize that.

The Soviet Union hasn’t existed for two decades. I’m sure, though, that there are some among Bachmann’s base that are still worried about the Soviet Union reforming, regaining power, commandeering the supercommittee, and propelling the US into an unstoppable decline.

Bachmann has long worried that the US may become like the Soviet Union, particularly in her campaign against public school curriculum that she believed would lead to a “state-planned economy.” But fear of the actual USSR is a new one.