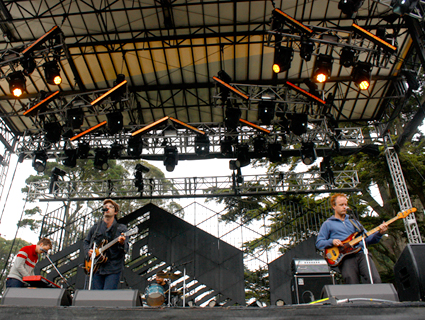 Back when the guys of Clap Your Hands Say Yeah first got together, musicians and labels were struggling to figure out how to operate in the internet era. Only a few years earlier, a boom in file-sharing, popularized by Napster, had upset some of the music industry’s biggest icons, like Metallica, Madonna, and Dr. Dre, who sued Napster over copyright issues.

But fledgling artists like CYHSY saw opportunity in the internet’s accessiblity. The Pew Research Center, which in March 2004 released its first survey on the internet’s impact on artists, and found that, while individual artists largely thought unauthorized file sharing should be illegal, the internet on the whole enhanced creativity and removed barriers to getting their music heard. “When we were in college, it was like, ‘There’s this thing called Kazaa, where you can download The Strokes, The Shins, or The White Stripes,” drummer Sean Greenhalgh, wearing a black hoodie and Keds, recalls before the band’s show at The Independent last Wednesday.

CYHSY was in the first wave of acts that found success on the web before signing to a record label. Its self-titled first album, released online in June 2005, came during “a perfect storm of a time when we made a good record and a time when the internet was young,” Greenhalgh recalls. News of the band spread rapidly over blogs like Pitchfork and by word of mouth—and early endorsements from David Bowie and David Byrne.

Even before releasing that first album, CYHSY (which also includes Alec Ounsworth, Robbie Guertin, and Lee and Tyler Sargent) would upload unfinished tracks to the web, something they were later advised was a bad move. The band didn’t even have a name until a few months after it formed, although it was already performing around New York. Driving through South Brooklyn, the bandmates saw their future name painted in giant letters across a brick wall, and figured it was a sign, Greenhalgh says. “I don’t think we considered the long-term implications.”

Greenhalgh recalls how the band was backstage getting ready for a show at the Knitting Factory a few years ago when they heard a rumor that Bowie was at the house. They walked on stage, looked up in the stands, and saw that it was true. By October 2005, they’d signed on with the UK label Wichita Recordings, which also represents The Dodos and Bloc Party. “By the time the record labels came around, we were already doing ourselves a bunch of things that labels were offering to us,” he says. “It was a strange thing, but we were able to jump on it and run with it.”

Clap Your Hands Say Yeah’s success continued with its second album, 2007’s Some Loud Thunder, which debuted at No. 47 on the Billboard 200 and featured the hit “Satan Said Dance,” which ranked among the Rolling Stone‘s top song picks for that year. The album led to high-profile gigs at Lollapalooza and on Late Night with Jimmy Fallon. But fans were taken by surprise in 2009, when the band unexpectedly decided to take a break to pursue solo projects, rather than simply set out to make a third record. “Why do it just to do it, because that’s what people expect?” Greenhalgh says.

After a two-year hiatus, CYHSY is back with Hysterical, due out next month. Greenhalgh says the band’s time apart has enriched the new album. Their latest performance at SF’s Outside Lands music festival this past weekend didn’t reveal muchnew stuff, but the crowd was excited to hear singer Ounsworth’s distinct, crackling voice against the band’s quirky keyboards and plucked-guitar melodies. You can download a sample track from the forthcoming album here.

Here’s a video teaser of Hysterical: