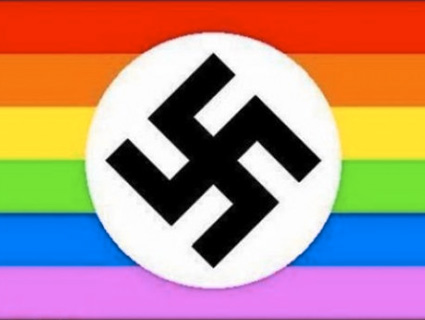 Ahead of Rick Perry’s big prayer and fasting rally in Houston on Saturday, the New York Times‘ Erick Eckholm had an interesting piece Thursday on the newfound prominence of the American Family Association among social conservatives. But as Sarah Posner notes, there was a small problem:

The Times’ handling of some of the AFA’s most incendiary rhetoric is puzzling. Here’s an organization whose most visible representative, radio host Bryan Fischer, spouts blatantly racist, anti-Muslim, and anti-gay rhetoric. But, hey, while some people call that hate speech, there’s always two sides of a story, right? Like “Adolph Hitler was a homosexual and that the Nazi Party was largely created by ‘homosexual thugs.'” That, in the Times piece, is a “disputed theory,” rather than a conspiracy theory made up by anti-gay zealots.

For real. The Times quote in full reads: “Mr. Fischer trumpets the disputed theory that Adolph Hitler was a homosexual and that the Nazi Party was largely created by ‘homosexual thugs’— evidence, he says, of the inherent pathologies of homosexuality.” Fischer has since gone even further, stating that today’s gay rights activists are “literally” Nazis, who are waging a SS-style campain to crack down on dissenters. That’s no surprise because both of those theories stem from the same book, The Pink Swastika, which posits that gay rights organizations in the United States are the intellectual heirs to the Third Reich and are attempting to use Hitler’s repressive tactics to advance their radical agenda.

The problem is that the facts do not support Fischer’s theory, and so inasmuch as we care at all about facts, his theory has not been “disputed,” it has been “rejected” or “debunked.” Ron Rosenbaum has published a pretty thorough takedown of the “gay Hitler” thesis—but his takedown is targeted at a reputable, relatively disinterested historian—which the The Pink Swastika‘s authors are not.

In reality, gays were targeted for extermination by Hitler, not recruitment. Bob Moser, who notes that somewhere between 50,000 and 100,000 gays were arrested during the Third Reich, finds this quote from Heinrich Himmler, Hitler’s security chief: “That wasn’t a punishment, but simply the extinguishing of abnormal life. It had to be got rid of, just as we pull out weeds, throw them on a heap, and burn them.” That is literally what the Nazis did to about 10,000 gay men.

The much larger problem here is that the question of whether or not gays are Nazis—and whether or not that argument is worth condemning—has somehow become a partisan issue. When the Southern Poverty Law Center classified the American Family Association and a handful of other social conservative organizations as “hate groups” earlier this year (on account of their frequent promotion of such debunked charges) the reaction from high-profile Republicans was swift. Dozens of congressmen, including Speaker John Boehner (R-Ohio), Majority Leader Eric Cantor (R-Va.) and Rep. Michele Bachmann (R-Minn.) signed on to a letter of support for the organizations:

This is intolerance, pure and simple. Elements of the radical Left are trying to shut down informed discussion of policy issues that are being considered by Congress, legislatures, and the courts. Tell the radical Left it is time to stop spreading hateful rhetoric attacking individuals and organizations merely for expressing ideas with which they disagree. Our debates can and must remain civil – but they must never be suppressed through personal assaults that aim only to malign an opponent’s character.

On the one hand, conservatives accuse gay rights activists of reprising the worst tactics of the Third Reich. On the other hand, liberal groups call them out on it. See, both sides do it!