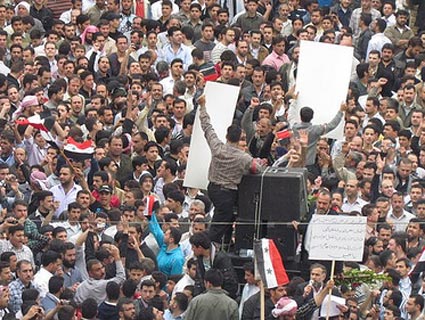 The basics: Syria is an Arab country with more than 22 million people; it borders many of the major players in the Middle East (Israel, Lebanon, Iraq, Jordan, Turkey) and is roughly the size of North Dakota. Syria famously lost the Golan Heights to Israel in 1967, during the Arab-Israeli war; negotiations between the two countries have been minimal in recent years. Like many countries in the region, Syria’s main export is oil. Unlike Saudi Arabia or Iran, however, Syria’s oil reserves are relatively small; it ranks 33rd in the world. Syria is home to a smorgasbord of ethnicities and religions: Arabs, Kurds, Christians, Sunnis, Alawites, and Druze. The capital, Damascus, is a bustling metropolis (many believe it to be the oldest continuously inhabited city in the world) but is not the site of the country’s most significant protests. That city, Hama, is the country’s fourth-largest, with fewer than one million occupants.

Who’s in charge?: Bashar al-Assad has ruled Syria since 2000. His father, Hafez al-Assad, a member of the Ba’ath Party, came to power in 1970 after leading a bloodless coup. Hafez Assad’s family came from a minority religious sect: the Alawites, an offshoot of Shia Islam. In 1982, Hafez Assad ordered one of the most brutal massacres in the recent history of the Middle East: His troops killed nearly 20,000 people in—interestingly—the city of Hama. In 2000, Hafez Assad died, and Bashar took over. To some, the shift from Hafez to Bashar suggested an opportunity (albeit limited) for Syria to become a more moderate country. Eleven years later, it seems Bashar is intent on following in his father’s footsteps. Of course, Vogue magazine, in its recent profile of first-lady Asma Assad, did say that Syria is “the safest country in the Middle East.” So, that’s something.

What’s happening? Since March, Syrians, especially those in Hama, have intermittently protested the Assad government. During the first week of August—which this year coincided with Ramadan, the holiest time in Islam—the Syrian army began a brutal campaign to control Hama, killing citizens in a seemingly indiscriminately manner. “People are being slaughtered like sheep while walking in the street,” one resident of Hama told the AP on August 4. Reports of the number of Syrians killed in Hama in the first week of August alone range from around 200 to 300 or more. On August 7, the Syrian army expanded its assault on protesters by reportedly killing 55 people in two other cities: Deir al-Zour and Houleh.

What is the rest of the world doing about this? On August 4th, Secretary of State Hillary Clinton said that the United States believed that 2,000 Syrians had already died at the hands of the Assad government. The UN Security Council issued a statement saying it condemned the Syrian government’s “widespread violations of human rights and the use of force against civilians.” The United States, Germany, and France have recently discussed potential measures “to pressure the Assad regime and support the Syrian people.” Syria has also faced serious criticism from its neighbors in the Middle East. Turkey, a country that maintains deep economic ties with Syria, has repeatedly condemned Assad’s violence toward protesters. Elsewhere, Saudi Arabia recently recalled its ambassador from Syria. In a speech on August 7, Saudi Arabia’s leader, King Abdullah, said, “What is happening in Syria is not acceptable for Saudi Arabia.” The Arab League, on the other hand, still holds out hope for the Assad regime. The group has called for an end to the Assad government’s assault against protesters, but in the same statement, Nabil al-Arabi, the organization’s secretary-general, said “The chance is still available for fulfilling the reforms.”

How does this affect the United States? “It is no exaggeration to say that Syria holds the key for nearly all of America’s foreign policy goals in the Middle East,” says Reza Aslan, a professor at the University of California-Riverside and an expert on the region. “As Syria goes, so goes the region,” he adds. For years now, Syria has been an ally of several major US enemies in the region. Iran uses Syria to funnel weapons and resources to Hezbollah, the Shiite militia that dominates most of southern Lebanon. Without a strong relationship with Syria, Iran’s loss is twofold: a loss of influence on Israel and Lebanon via Hezbollah and a chink in the armor of its “influence” in the Arab world. Syria itself maintains political clout in Lebanon, too; it occupied the country until 2005. Syria also shares a key border with Israel. So far, efforts at influencing Assad have been fruitless. Visits from key US figures and the reopening of an embassy in Damascus have done little to move Syria toward reform.

So what should the United States do? Robert Danin, a senior fellow at the Council on Foreign Relations, favors a two-pronged approach: First, “assemble a contact group, similar to the one that has been formed to deal with Libya” and then “target sanctions specifically at key members of the regime that have been involved violence against the Syrian people.” But does the United States really have that much influence? “We should not exaggerate significance or impact [of the United States], which is marginal,” Marc Lynch, a professor at George Washington University, has warned. “Unilateral oil sanctions will have limited effect. Magic words don’t work.”

How do I follow what’s happening in real time? For keeping up with what’s happening in Syria—as well as most stories unfolding in the Middle East—it’s a good idea to follow the Twitter feed of Blake Hounshell, Foreign Policy‘s managing editor. Ahmed Al Omran, the author of the Saudi blog Saudi Jeans, and Borzou Daragahi, the Middle East reporter for the Los Angeles Times, are also good Syria tweeps. The hashtags to follow are #RamadanMassacre and #Syria. Al-Jazeera English, the New York Times, and the Guardian‘s constantly updated Middle East blog all provide good, up-to-date information on the situation in Syria too.