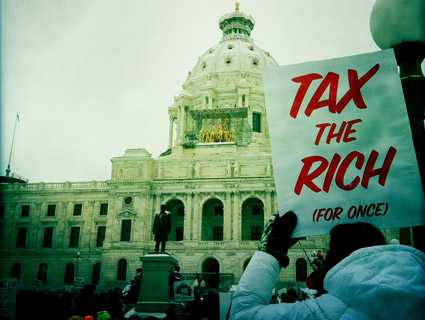 On Saturday, the Obama administration unveiled the “Buffett Rule,” a proposed tax on millionaires and billionaires named after celebrity investor Warren Buffett, who has long argued that the federal government should demand more of the wealthy. The millionaires tax is certain to become a major point of contention in the 2012 presidential campaign, and Republicans have wasted no time in heaping it with calumnies. Here are the six most popular conservative arguments against a progressive tax code, and why they’re wrong:

It’s class warfare!
Yeah right. Three decades of laissez-faire economic polices have allowed the rich to double their share of the national income while paying tax rates a fifth lower than before. The result, notes Kevin Drum, was “wage stagnation for everyone else, a massive financial collapse that ravaged the middle class, an enormous deficits that they’ll be asked to pay off eventually.” If the millionaires tax is the only blowback, the wealthy should count their blessings.

It reduces incentives to work and invest
Experience shows otherwise. As Nancy Folbre points out over at Economix, “average annual rates of growth in gross domestic product in the high tax era between 1950 and 1980 exceeded those of the last 30 years. Increases in the top tax rate under President Bill Clinton were followed by robust economic expansion.”

It’s an unstable source of revenue
A recent essay in the Wall Street Journal argued that the high volatility of upper-level income makes it impractical to rely on taxing it. But this concern is vastly overblown and can be easily dealt with by establishing rainy day funds.

It’s unfair
In the libertarian view, the rich are entitled to their gains because they worked for them. But this ignores how structural changes in the economy such as globalization, financial deregulation, and the rise of the knowledge-based economy have disproportionately rewarded the wealthy. At the same time, we’ve failed to reinvest in government programs that once leveled the playing field, such as financing for community colleges and public universities.

The rich will leave the country
Good riddance, writes Don Peck in a recent Atlantic essay on how to save the middle class: “America remains a magnet for talent, for reasons that go beyond the tax code; and by international standards, none of the tax changes recommended here would create an excessive tax burden on high earners. If a few financiers choose to decamp for some small island-state in search of the smallest possible tax bill, we should wish them good luck.”