On September 6, an article on Andrew Breitbart’s Big Government site announced that the overwhelming scientific consensus on climate change had been debunked once and for all. Nature, “the world’s most cited scientific periodical, has just published the definitive study on Global Warming that proves the dominant controller of temperatures in the Earth’s atmosphere is due to galactic cosmic rays and the sun, rather than by man,” the article said. “One of the report’s authors, Professor Jyrki Kauppinen, summed up his conclusions regarding the potential for man-made Global Warming: ‘I think it is such a blatant falsification.'”

The article, written by “nationally recognized financial writer” Chriss W. Street, then revisited the smear campaign known as “Climategate” (which had implicated Nature) and asserted that the study was “a tectonic rejection by academia” of international efforts to combat climate change.

There was one little problem with the Big Government piece, though. Professor Jyrki Kauppinen, supplier of the “blatant falsification” comment, was not one of the study’s 63 authors. And it turns out that the article’s breathless summary of what the study shows is (shockingly!) flat-out wrong. 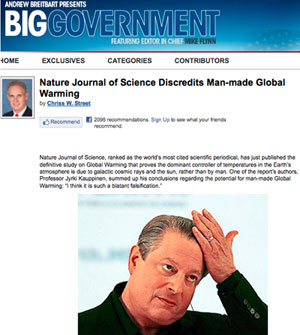 The quote from the non-author caught the attention of New York Times environmental writer Andrew Revkin, who submitted an error report about it at MediaBugs, a nonpartisan site that helps get errors in the news media corrected. (Disclosure: I’m one of the site’s creators.) MediaBugs then alerted Breitbart to the mistake using Big Government’s online feedback form, and also sought a response from him multiple times on Twitter. Breitbart has not responded and has ignored the mistake. (I also emailed Street for a response, to no avail.)

Breitbart’s silence may seem unsurprising. Then again, accurate reporting is something that the right-wing media gadlfy has claimed to care a lot about lately. When the Huffington Post wrongly accused Breitbart of doctoring a video related to the debt-ceiling battle in August, he threatened war via Twitter, and then celebrated when HuffPo issued a retraction and apology. After publishing lewd photos that brought down Rep. Anthony Weiner (D-N.Y.) back in June, Breitbart elbowed his way to the front of a major press conference seeking vindication for his work. He boasted to the New York Times that political conservatives bring him scoops to publish because “They know I’m willing to march through the fire with them.”

But apparently he’s not really sweating his site’s global warming blunder. The dramatic opening of the Big Government piece simply plopped in a quote from Kauppinen—one that appears to have come from a Finnish newspaper article from more than a year earlier. Trumpeting the quote as a conclusion of the study helped inject the fundamentally flawed piece into the digital media stream.

Get the lowdown on Breitbart’s favorite media fabricator and hand in pimps, lies, and videotapes.

The study in Nature actually shows no conclusive link between cosmic rays and climate change. As RealClimate’s Gavin Schmidt noted in late August when the paper came out, “It is eminently predictable that the published results will be wildly misconstrued by the contrarian blogosphere as actually proving this link. However, that would be quite wrong.” Schmidt, a climate modeller at NASA’s Goddard Institute for Space Studies, then explained in detail why anyone arguing that the study definitively satisfied the criteria necessary to prove that link “will be going way out on a limb.”

According to Revkin, the Big Government piece is a classic example of what could be called “single-study syndrome,” which tends to turn up whenever a political agenda is threatened or supported by a specific line of scientific inquiry. “Some new finding, however tentative, gets highlighted while the broader suite of research on a tough subject is downplayed or ignored,” Revkin told me in an email. “And few questions are tougher than clarifying the role of clouds in climate change.” The appetite for headline-grabbing conclusions, he said, gives rise to fast-and-loose science coverage that torques public discourse until it’s mainly hyperbole.

But Breitbart seems to have been yearning for credibility lately. A friendly profile of him in the New York Times suggested that he stands out among conservative media personalities because of his accessibility. “He gives out his cellphone number in speeches and passes along his personal e-mail address to almost anyone who asks,” the Times piece gushed. “If you write him, chances are you will hear back.”

On this one, we’re still waiting.