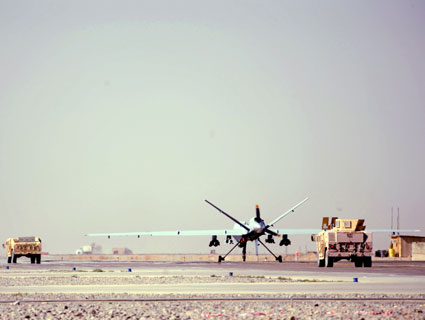 Responding to the news that the Obama administration intends to increase its use of drone strikes in Somalia, my colleague Kevin Drum shrugged “endless war becomes more endless.” It’s worth remembering though, how Somalia became such an prominent part of America’s global battlefield.

Al Shabab, the Somali-based al Qaeda affiliate whose remarkable success in recruiting American citizens has frustated law enforcement officials, emerged in its current form only after 2006, in the aftermath of a Bush administration-backed Ethiopian invasion meant to displace the Islamic Courts Union. That intervention merely destabilized Somalia further and empowered Al Shabab. The government that succeeded the relatively stable ICU ended up being run by a former ICU member anyway, and Al Shabab ended up controlling much of the country. So all the Bush-backed intervention did was make things exponentially worse.

As Jeremy Scahill reported in August, however, that wasn’t even the beginning of the cycle. The ICU, which was displaced because the Bush administration feared that their Islamism would align them with al Qaeda, emerged as a response to American-backed warlords who were targeting and killing suspected Islamic militants for money in the hopes of ever-more lucrative American sponsorship.

Somalia is being devastated by a terrible famine afflicting the region, but the expansion of the drone war suggests that US policymakers still see the country much as it did five years ago—as little more than a security problem that can be solved by the targeted application of violence. History suggests otherwise, and not just in Somalia.