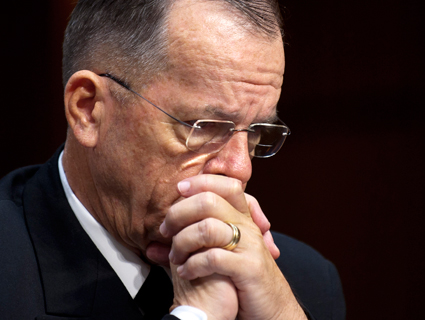 On Thursday, Admiral Mike Mullen, the outgoing Chairman of the Joint Chiefs of Staff, told a Senate committee that the Pakistan’s army intelligence service, the ISI, has been working hand-in-hand with the Pakistan-based Haqqani terrorist network, one of three allied insurgent groups fighting NATO forces alongside the Taliban. But how did the US know that for sure? Reuters posits an answer:

Bruce Riedel, a former top CIA analyst with close ties to the Obama White House, which he once advised, told Reuters administration officials have told him that militants who attacked the U.S. Embassy and NATO headquarters in Kabul on September 13 phoned individuals connected with the ISI before and during the attack.

Mullen has linked the alleged Haqqani-ISI tag team to at least three attacks against the US. This all comes as the Senate appropriations committee voted on Wednesday (the day before Mullen levelled his allegation) to make US aid to Pakistan “more rigorous, and contingent upon its cooperation in fighting militants such as the Haqqani network.” But that’s not exactly a game-changer for this fraught relationship.

Meanwhile, Reuters says that Mullen’s “harsh words appear to represent a new low in U.S.-Pakistani relations”—yes, okay, given his prominence, maybe. But by what measure is this a new low? Apparently there’s no drone strike too outrageous, no CIA-linked midnight murder too embarrassing, no terrorist bunker too cozy, and no special ops raid too invasive, for the US or Pakistan to say: At what point is enough enough?