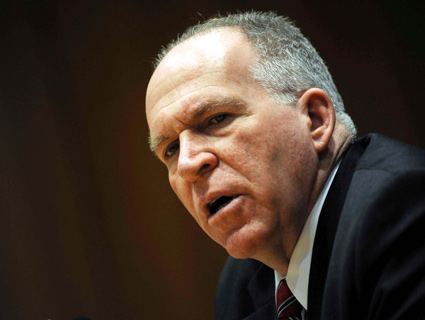 Last month, John Brennan, the White House counterterrorism czar, delivered a major speech at Harvard on the administration’s counterterrorism practices at home and abroad, contending that they all are guided by the rule of law. He did not specifically address the issue of the US government targeting an American citizen overseas for assassination. Nor did he mention Anwar al-Awlaki, the American-born cleric who had become associated with Al Qaeda in Yemen and linked to terrorist attacks in the United States—and who was reportedly killed on Friday in a drone strike. But Brennan did defend the Obama administration’s right to launch military assaults in other countries aimed at Al Qaeda and its allies.

He noted, “This Administration’s counterterrorism efforts outside of Afghanistan and Iraq are focused on those individuals who are a threat to the United States, whose removal would cause a significant—even if only temporary—disruption of the plans and capabilities of Al Qaeda and its associated forces.”

Civil libertarians might take exception to this standard. But Brennan noted that the administration did adhere to a standard of “imminence” regarding the threat posed by such targets. He did, however, maintain that a “more flexible understanding of ‘imminence’ may be appropriate when dealing with terrorist groups, in part because threats posed by non-state actors do not present themselves in the ways that evidenced imminence in more traditional conflicts.”

This high-level drone attack may spur further debate over the rule of law and drone attacks. Then again, it may not spur much debate: Taking out Awlaki will likely be a popular move, and perhaps a productive one, in Obama’s necessary war against Al Qaeda. There can be little doubt that his administration’s use of drone strikes—and the successful raid that killed Osama bin Laden—has made it tougher for Al Qaeda to again attack the United States.

Obama has repeatedly said that Americans do not have to make a false choice between security and values. Yet counterterrorism practices—including indefinite detentions—raise uneasy questions. Can an effective shadow war be prosecuted within a clear and transparent set of rules that preserve accountability and due process? At Harvard, Brennan claimed that’s what the administration is doing. But there still seems to be some fog.

Here’s the portion of the Brennan speech in which he addresses the sort of action that struck Awlaki:

As the president has said many times, we are at war with Al Qaeda. In an indisputable act of aggression, Al Qaeda attacked our nation and killed nearly 3,000 innocent people. And as we were reminded just last weekend, Al Qaeda seeks to attack us again. Our ongoing armed conflict with Al Qaeda stems from our right—recognized under international law—to self defense.

An area in which there is some disagreement is the geographic scope of the conflict. The United States does not view our authority to use military force against Al Qaeda as being restricted solely to “hot” battlefields like Afghanistan. Because we are engaged in an armed conflict with Al Qaeda, the United States takes the legal position that —in accordance with international law—we have the authority to take action against Al Qaeda and its associated forces without doing a separate self-defense analysis each time. And as President Obama has stated on numerous occasions, we reserve the right to take unilateral action if or when other governments are unwilling or unable to take the necessary actions themselves.

That does not mean we can use military force whenever we want, wherever we want. International legal principles, including respect for a state’s sovereignty and the laws of war, impose important constraints on our ability to act unilaterally—and on the way in which we can use force—in foreign territories.

Others in the international community—including some of our closest allies and partners—take a different view of the geographic scope of the conflict, limiting it only to the “hot” battlefields. As such, they argue that, outside of these two active theaters, the United States can only act in self-defense against Al Qaeda when they are planning, engaging in, or threatening an armed attack against US interests if it amounts to an “imminent” threat.

In practice, the US approach to targeting in the conflict with Al Qaeda is far more aligned with our allies’ approach than many assume.  This administration’s counterterrorism efforts outside of Afghanistan and Iraq are focused on those individuals who are a threat to the United States, whose removal would cause a significant—even if only temporary—disruption of the plans and capabilities of Al Qaeda and its associated forces.  Practically speaking, then, the question turns principally on how you define “imminence.”

We are finding increasing recognition in the international community that a more flexible understanding of “imminence” may be appropriate when dealing with terrorist groups, in part because threats posed by non-state actors do not present themselves in the ways that evidenced imminence in more traditional conflicts. After all, Al Qaeda does not follow a traditional command structure, wear uniforms, carry its arms openly, or mass its troops at the borders of the nations it attacks. Nonetheless, it possesses the demonstrated capability to strike with little notice and cause significant civilian or military casualties. Over time, an increasing number of our international counterterrorism partners have begun to recognize that the traditional conception of what constitutes an “imminent” attack should be broadened in light of the modern-day capabilities, techniques, and technological innovations of terrorist organizations.