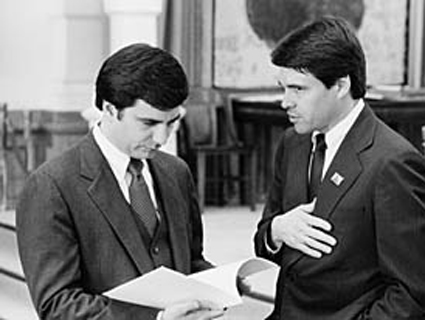 Mike Toomey (left) and Rick Perry (right) have been friends since they entered the Texas House together in 1985.Courtesy of the Texas State Library and Archives Commission

In 2010, private corrections lobbyists gave Texas Governor Rick Perry $100,000 during his re-election campaign, and then Perry went on to push a series of proposals that would have privatized the prison health care system and neutered the commission tasked with oversight of the nation’s second-largest inmate population—all in the name of austerity. That’s the basic gist of my story today.

But what’s also noteworthy about the story is who it involves—specifically, Perry’s former chief of staff Mike Toomey, who is now a lobbyist for the nation’s largest private prison firm. He was also a lobbyist for Texans for Lawsuit Reform, the political juggernaut that has poured millions into Perry’s campaigns and helped secure business-friendly tort reform in the state. Last month he started Make Us Great Again, a super PAC designed expressly to support the Governor’s presidential run. Toomey was the lobbyist for the pharmaceutical giant Merck when Perry signed a controversial executive order mandating that adolescent girls receive a Merck vaccine against HPV. If you don’t follow Texas politics, you probably don’t know him, but he’s had an outsized influence on Perry’s rise.

I recommend reading Patricia Kilday Hart’s profile of Toomey in Texas Monthly in 2003, back when Toomey was the Governor’s chief of staff. Here’s a snippet:

A common complaint heard around the Capitol is that Toomey “hasn’t taken off his lobby hat”—meaning that as Perry’s chief of staff, he continues to argue positions favorable to his former clients, especially [Texans for Lawsuit Reform]. Toomey was ready with his answer when I raised the point in our interview: “I have two responses to that. First of all, I didn’t have any client that I didn’t agree with philosophically about what they were doing. Just go through my client list. I don’t have clients I disagree with.” The second rebuttal was that he delegates issues on which he has lobbied previously to other staffers. As an example, he said he sent representatives of SBC Communications (Southwestern Bell) to an assistant, who could take the company’s concerns directly to the governor, since Toomey himself had worked as a lobbyist for its competitor, AT&T…

Toomey’s involvement on behalf of his former clients might become a major problem if he returns to lobbying for them, but Williamson says that is unlikely. He and other friends predict that Toomey will return to electoral politics, running for a statewide office like comptroller, or alternatively, go to work for a conservative advocacy foundation.