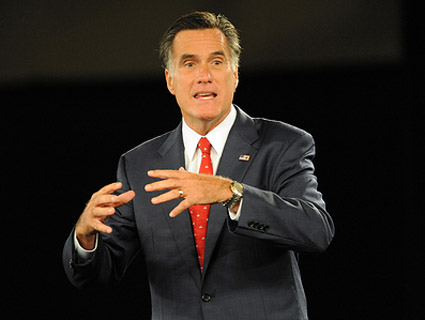 As he unveiled his plan to jumpstart the American economy at a North Las Vegas trucking company Tuesday afternoon, GOP presidential hopeful Mitt Romney kept brandishing his iPhone 4. The smartphone symbolized America’s global, 21st-century economy, while President Obama’s economic policies, Romney explained, were backward, ineffective, stuck in the past. “President Obama’s strategy is a pay phone strategy,” he said, “and this a smartphone world.”

But unlike Apple’s innovative and regularly revamped iPhone, Romney’s new economic plan, “Believe In America,” is pretty stale. The 160-page proposal consists largely of stripping away federal regulations, slashing taxes, amping up domestic oil drilling, and embracing free-market principles. In other words, pretty much the same stuff he advocated during his last presidential campaign. Of the ten actions Romney says he would take on day one of his would-be presidency, six appeared in near-identical form in his old plan. (The list includes repealing Obama’s health care reform bill, which obviously wasn’t possible in 2007. So really call it six out of nine.)

Take Romney’s new tax reform prescriptions. He calls for keeping marginal tax rates at basement-low rates. He wants to eliminate the capital gains tax for middle-income taxpayers, and slash corporate taxes to supposedly make US corporations more competitive with their overseas counterparts. (The US, in fact, is “already one of the least-taxed countries for corporations in the developed world,” according to (PDF) the Center for Tax Justice.) Romney’s new plan would also kill the federal estate tax.

These ideas are straight out of Romney’s old plan. In February and March 2007, according to Romney’s old campaign website, the candidate pledged to slash taxes on savings for the middle class, lower marginal tax rates, eliminate the death tax, and “make our corporate tax rate competitive with its international partners.” Sound familiar?

The similarities don’t end there. On his day one to-do list, Romney promises to cut non-defense discretionary spending—comprising 15 percent of the federal budget, this includes money for jobless benefits, public education, veterans aid, environmental protection, and health research—by $20 billion in his first year. In 2007, he similarly pledged to trim non-defense discretionary spending by $30 billion a year. His new plan also pledges to turn Medicaid into a block grant program run by the states, which he suggested in the 2008 campaign under the guise of “promot[ing] innovation in Medicaid.”

Echoing a typical GOP talking point, Romney’s new plan includes a proposal to roll back regulations that “unduly burden the economy or job creation.” Romney’s old plan advocated the same, proposing a “regulatory relief board” to trim regulations that “choke off growth.” Both plans call for weakening the Sarbanes-Oxley Act, the much-needed package of accounting reforms enacted after the Enron, Tyco, and WorldCom scandals, and also for consolidating federal job retraining programs to help laid-off workers develop new skills and find new employment. Tort reform, a favorite rallying cry of GOPers, features in both plans, too.

When it comes to powering the future, the new Romney plan advocates for more domestic oil drilling and coal mining to wean the US off of foreign energy sources. Ditto the old plan, which suggested drilling for oil in the Arctic National Wildlife Reserve in Alaska and the Outer Continental Shelf as well as developing alternate energy sources such as biodiesel, ethanol, nuclear, and clean coal.

This isn’t to say “Believe in America” is completely cribbed from the Romney 2008 campaign. Proposals to sanction China for artificially devaluing its currency and sign free trade agreements with a trio of countries are new additions to Romney’s economic manifesto. So is repealing the Dodd-Frank financial reform bill and creating free-trade-friendly “Reagan Economic Zones.” But, to borrow Romney’s smartphone metaphor, the former governor’s vision for transforming America’s looks a lot like repackaging an old iPhone 1 in an iPhone 4’s shell.