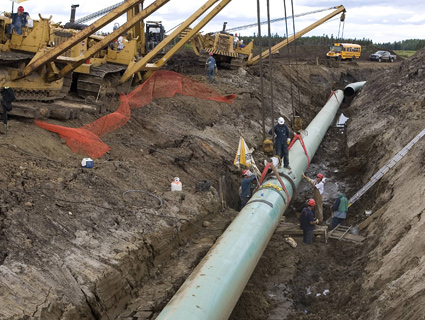 Already under fire for emails that show a cozy relationship between a TransCanada lobbyist and government officials, the State Department is now getting hammered for what appears to be a clear conflict of interest in the environmental review process for the proposed pipeline.

It turns out that Cardno Entrix, the environmental contractor that State hired to conduct its environmental impact analysis, has also done quite a bit of work for TransCanada, the Canadian energy company seeking to build the massive pipeline. TransCanada is listed as a “major client” for Cardno Entrix, and had employed the contractor in the past. The New York Times had the story over the weekend:

The department allowed TransCanada, the company seeking permission to build the 1,700-mile pipeline from the oil sands of northern Alberta to the Gulf Coast in Texas, to solicit and screen bids for the environmental study. At TransCanada’s recommendation, the department hired Cardno Entrix, an environmental contractor based in Houston, even though it had previously worked on projects with TransCanada and describes the pipeline company as a “major client” in its marketing materials.

While it is common for federal agencies to farm out environmental impact studies, legal experts said they were surprised the State Department was not more circumspect about the potential for real and perceived conflicts of interest on such a large and controversial project.

Perhaps this makes it less surprising, then, that the State Department’s final environmental impact statement, released at the end of August, found “limited adverse environmental impacts” related to the pipeline. Cardno Entrix has also played a role in coordinating the public comment sessions on the pipeline, maintains the State Department’s website for the project, and has even collected public comments about the project via email.

As the Times points out, this seems to be a violation of the National Environmental Protection Act, which outlines how agencies should undertake this kind of environmental review. It specifically states that the lead agency should be in charge of picking contractors, and that the companies those agencies contract with should not have any other financial ties to the project. It appears that Cardno Entrix has substantial financial ties to TransCanada, and would benefit from the pipeline’s approval.

This comes, of course, after the environmental group Friends of the Earth released a number of emails between Paul Elliot, the head lobbyist for TransCanada, and State Department officials showed close ties between the company and government officials. FOE and other environmental groups are arguing that this should disqualify State from making a fair decision on the pipeline.

Kerri-Ann Jones, the assistant secretary of state for oceans and international environmental and scientific affairs, batted back questions about the State Department’s handling of the pipeline consideration a press conference on Friday. “The Department of State is committed to an impartial, rigorous, transparent, and thorough examination to determine whether the Keystone XL is in the national interest,” Jones said.

This latest round of revelations is likely to fuel more criticism of State’s handling of the process, however.