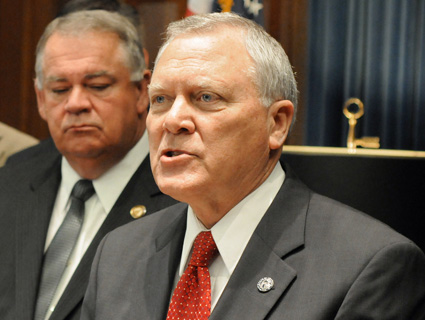 Georgia has the hopped aboard the redistricting bandwagon. On Thursday, Republican Gov. Nathan Deal and Attorney General Sam Olens filed a federal lawsuit against the Department of Justice, arguing that their new electoral maps for its state House, state Senate, and Congressional House races comply with the Voting Rights Act (VRA), the Atlanta Journal-Constitution reports.

States re-draw their voting districts every ten years or so to reflect population changes indicated in the latest US Census data. Under Section Five of the VRA, Georgia is one of nine states required to pre-clear its maps (and other changes to election law) with the DOJ or the DC district court. These states, most of which reside in the South, have troubling records of disenfranchising their minority populations.

The trouble is, these states still can’t seem to get it right (see Texas, Alabama, and Arizona). But Deal and his fellow Georgia Republicans, who passed a tough new immigration law several months ago, are also asking the DOJ to pre-empt their lawsuit and approve the plan on their own. If they do so, Deal, et. al, will drop the suit.

House Minority Leader Stacey Abrams, D-Atlanta, said it does not matter to her if the state went first to the Justice Department or to court.

Republicans’ “violations of the Voting Rights Act…regardless of the route they take, the end result will be one that rejects maps that re-segregate Georgia,” she said.

Abrams said her party’s hopes for the maps’ rejection were bolstered recently by the Justice Department’s decision to challenge Texas’ redistricting plan and by a federal judge’s decision in Alabama to reject a challenge of the constitutionality of the Voting Rights Act.

“If one takes the Alabama decision from the courts and the Texas decision by the Justice Department together, it’s clear Georgia’s maps will face some very strong challenges,” she said.

Georgia is following the example set by Texas Republicans, who also took their case to court rather than trying to resolve it directly with the DOJ. Why? A DOJ under a Democratic president, the thinking goes, is unlikely to clear a GOP-drawn map, so a legal battle is the best option to get the GOP-friendly map they want.

And although Deal thinks his state has better odds in court, this is hardly an open-and-shut case. Look at previous states that mounted legal redistricting challenges: A district court judge threw out Alabama’s suit, and the DOJ found the Texas map to be racist. Georgia, then, is stuck between a rock and a VRA-upholding place.