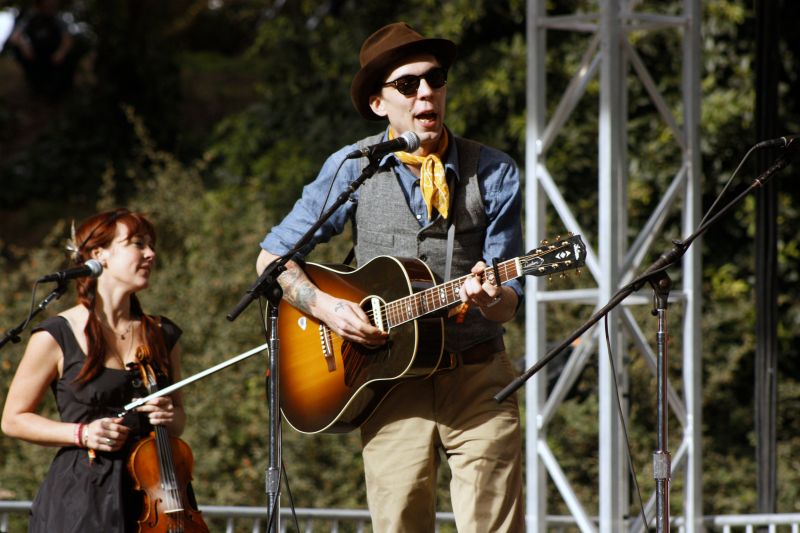 Being born into a famous family can be an artist’s greatest blessing or most reviled curse. Sure, things come easier when your parents are there to open doors, but there’s always the fear that your life’s work is validated not by merit, but by your last name. So what happens when your famous parent leaves you at a young age? The baggage is there, but not the benefit.

Such is the story of Justin Townes Earle, the singer-songwriter son of successful country rocker Steve Earle—who in recent years landed a role on HBO’s Treme. JT was born in Nashville, and shortly thereafter, his father took off for Los Angeles to develop his burgeoning music career, leaving Justin with an overworked mother, two younger siblings, a last name, and not much else. “He was very absent in my early life. There was very little contact with my father,” Earle told me.

Now 29, Earle, is waist-deep in his own burgeoning career, with a fourth album out last year and, to hear him tell it, plans for the future as big as the summer Tennessee sky. And like any folk-music hero worth their salt, his success is built on a life of hard luck, hard work, and plenty of wanderin’.

Backstage at San Francisco’s annual Hardly Strictly Bluegrass Festival, Earle’s unwieldy frame is sprawled on a folding chair across from me. His eyes are shaded by a wide-brimmed hat and dark tortoise-shell sunglasses, and a blazing yellow ascot is knotted around his neck. He’s smoking something long, hand-rolled, and pungent (“Blue Delilah,” he says) and telling me the story of the first time he played this festival, at 19.

“I’d been up all night smoking crack in the Tenderloin,” Earle says of his first Hardly Strictly performance.

“It was nightmarish. It was to the point where I had a blister on my lip where I’d been up all night smoking crack in the Tenderloin,” he says, referring to SF’s seedy downtown district.

It’s practically a cliché that before you get to the top, first you have to hit rock bottom. The title track of Earle’s 2010 album Harlem River Blues tells of a sinful man who walks jubilantly uptown to the Harlem River to drown himself; major chords and gospel-choir vocals let you know that the act is more ablution than suicide. And that story of rejuvenation by self-destruction comes straight from Earle’s life.

His first guitar was a childhood gift from his father. He played on and off, never really feeling a connection to the hip-hop and punk rock most of his friends listened to. He always more drawn to the Sam & Dave records his friends’ parents would play at home.

He begrudgingly contributed to “a series of really terrible punk rock bands” (who hasn’t!), eventually falling in love with Nirvana’s Unplugged album. Excited by finding music he actually enjoyed, he played “Where Did You Sleep Last Night” for his dad. (After his parents got divorced, Steve kept in intermittent contact with his son, sometimes bringing him onstage in later years.) Steve immediately called Justin’s bluff: “He said, ‘No, that’s a Leadbelly song,'” Earle recalls. “So I went and checked out Leadbelly, and that’s when my whole world just, whoosh, I mean everything changed for me. That’s when I knew I could do this. Before, I kind of questioned whether I spoke the right language or had the right credentials in order to do it. But then I figured out that those guys talked just like I did, you know?” Earle dropped out of high school, took up his first solo gig “at this terrible bar called the Springwater,” and never looked back.

“So I went and checked out Leadbelly… that’s when I knew I could do this.”

It sounds like a triumph of sorts, but there was one little problem: As a young teen, Earle had moved into a rundown Nashville apartment inhabited by junkies. By the time of his musical revelation, Earle was hook, line, and sinker into the world of hard drugs. “By 16, I was completely strung out,” he admits. “By the time I was 20 I was homeless.”

After a couple hellish years on the brink, a musician friend gave him an ultimatum: the smack or the guitar. So Earle chose rehab. By age 23, he was ready to return to music with a clear mind, with the help of a girlfriend who loaned him cash to cut an EP.

His years in the gutter hadn’t turned him off to folk music, and he devoted himself to following in the footsteps of guys like Woodie Guthrie, Brownie McGhee, and Sonny Terry, seminal folkies who, like Leadbelly, exploded what was thought possible by a one man with a guitar.

When the elder Earle needed someone to keep an eye on his New York City flat, Justin jumped at the chance, hoping to “find what Woodie Guthrie saw, and I found it. It’s a city of endless, endless possibilities.” His love affair with the Big Apple was the catalyst for rollicking, soulful Harlem River Blues, which echoes the great paeans to the working class by Guthrie and Bob Dylan: the Casey Jones railroad-man archetype reborn as a New York subway driver, the dismal Dust Bowl re-imagined as a dingy Brooklyn apartment.

Like the old labor anthems, these are simple, memorable songs. At Hardly Strictly, Earle invited the audience to join him onstage for the chorus of the album’s title track. Many accepted, including his dad, who had played the fest the night before. The roots of Earle’s blue-collar tributes are deeply personal: “My image of my mother when I was a kid was cutoff shorts, tank top, and work boots, you know, with a crescent wrench hanging from her belt. That was a very powerful image, and still is a very powerful image in my life,” he told me.

Earle is the master of his performance. He addresses the crowd with swagger, and his bare-bones four-piece string band displays meticulous attention to musical detail. Whatever a top-shelf last name gets you, Earle doesn’t need it any longer—if he ever did. “Life is better than it’s ever been,” he says. “There’s no need to take the edge off.”

Well, except maybe a little Blue Delilah now and then.