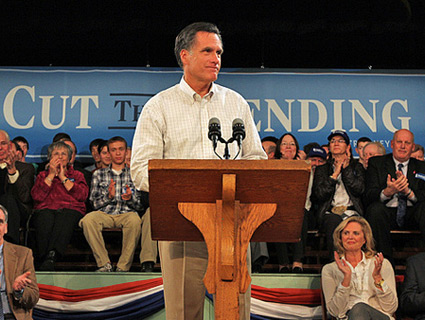 CBS News has obtained an interesting internal memo from the Romney presidential campaign:

With a primary strategy focused on winning New Hampshire, Republican presidential candidate Mitt Romney is set to pick up the endorsement…[of] Rep. Charlie Bass, but an internal campaign memo points [out] the potential downside of associating closely with the veteran congressman — his lack of purity on tax increases.

“Note that as we’re touting Charlie’s fiscal bona fides, he was one of 40 House Republicans to sign off on the letter to the super committee a few weeks ago saying they are open to revenue increases,” says the email from Jim Merrill, Romney’s top New Hampshire strategist. “He says he means through eliminating loopholes or simplifying the tax code, but conservatives don’t trust Charlie and are guessing this means he’ll vote to raise taxes. No way to avoid it — it’s part of the Charlie package. I’m sure it’ll come up.”

The leaked memo illustrates how sensitive the Romney campaign is about big chunks of the conservative base thinking Romney is a closet liberal.

In the real world, the support of Rep. Bass, a starkly ordinary East Coast Republican, shouldn’t be an actual problem for Romney. It’s not like this guy’s Jeremiah Wright, or anything; all he did was float the idea of possible revenue increases (much like another Republican you might recognize). This was, of course, after the New Hampshire representative’s years of support for a balanced budget amendment, his vote in favor of the Ryan budget, and earning a 89-percent grade on free market principles from the Cato Institute.

Unfortunately, Romney is deep in the GOP’s 2012 primary-election universe, a world in which an endorsement from a Republican with small tax hikes on the mind is anathema, but palling around with a tough-guy sheriff with white nationalist ties is somehow kosher.