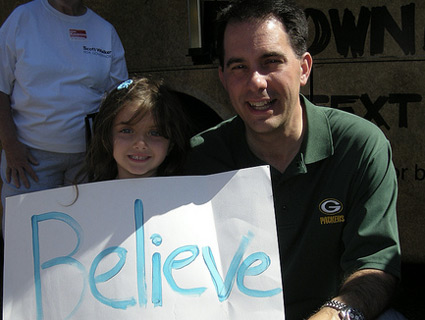 Wisconsin is facing a jobs crisis. The state’s official unemployment rate, down to 7.1 percent in January, has risen to 7.8 percent since Republican Gov. Scott Walker took office. But Walker and the GOP-led Legislature have a plan: First, they curtailed collective-bargaining rights and threatened to lay off government workers, including teachers, cops, and firefighters. Then Walker called a special jobs-focused session of the Legislature, which he dubbed “Back to Work Wisconsin,” to pass even more “job-creating” laws. At the top of the jobs agenda? Gutting the state’s sex ed standards and replacing them with abstinence-only education.

A bill launched during Walker’s jobs session and nearing passage in the Legislature would repeal significant portions of the state law that requires schools to provide comprehensive, scientifically accurate, and age-appropriate sex ed. On Wednesday, the state Assembly’s education committee is scheduled to consider whether it should join the Wisconsin Senate, which approved the bill on November 2, in voting for repeal. Republicans hold big majorities on the education committee and the Assembly overall, so the bill is expected to pass easily.

“They say nothing’s a bigger priority than the economy and jobs,” says state Rep. Gordon Hintz, a Democrat who sits on the committee that will take up the repeal bill on Wednesday. “But the legislation that’s actually passed has been the ultimate social agenda.”

Republicans hope to remove the part of the current law, also known as the Healthy Youth Act, that requires schools to teach about “the health benefits, side effects, and proper use of contraceptives and barrier methods” in discussion of pregnancy and sexually transmitted infections. The repeal legislation also strikes a portion of the law that recommends schools teach about “puberty, pregnancy, parenting, body image, and gender stereotypes.” Instead, the new law would require instructors to “identify the skills necessary to remain abstinent” for their students.

Previous attempts at teaching Wisconsin students “the skills necessary to remain abstinent” have failed spectacularly. A study released in 2009 by the state’s Division of Public Health found that 45 percent of Wisconsin’s teenagers said they are sexually active. Nearly 40 percent of them said that they had not used a condom the last time they had sex. “We knew what the problem was,” says Lisa Subeck, the executive director of NARAL Pro-Choice Wisconsin. “The problem was that we have teens engaging in unprotected sex and risky behavior.”

Wisconsin has done a fairly good job of holding down teen birth rates. According to the National Campaign to Prevent Teen and Unplanned Pregnancy, the state has 47 births per 1,000 young women between the ages of 15 and 19—seventh-lowest in the country. But teen pregnancy rates in some parts of the state, like Milwaukee, are much higher. More disturbingly, the rate of sexually transmitted infections has shot up rapidly. Between 1997 and 2007, the rate of infection for four common STIs increased 53 percent among Wisconsin teens, according to the Cap Times.

The law Republicans want to repeal “was seen as an incredible public health victory in the state,” says Sara Finger, executive director of the Wisconsin Alliance for Women’s Health. “We were finally in line with medical standards around human growth and development.” Under the law, schools can still teach that abstinence is the best way to prevent pregnancy or sexually transmitted infections. But schools are also required to inform kids about condoms and birth control. If school districts do not want to provide sex education, the law requires them to let parents know that it’s not part of the curriculum.

If Walker and the state GOP get their way, the new standards will be trashed, after just taking effect this school year. Schools would once again be able to teach abstinence-only sex ed.

Repealing the Healthy Youth Act fits into the “extreme pro-life agenda” that Walker and allies in the Statehouse have been pushing all year, Finger says. Pro-Life Wisconsin lists repealing the “sexualization of our children” as a top legislative priority for this year. “Government-funded birth control, whether provided directly or promoted educationally, encourages sexual promiscuity and with it a host of social pathologies including underage pregnancies, chemical and surgical abortions, and sexually transmitted diseases,” the group argues.

“Scott Walker has done everything he can to make Milwaukee more like Mississippi and Texas when it comes to education, health care, and the rights of women,” says Graeme Zielinski, a spokesman for the state Democratic party. “That’s not a flattering comparison.”

Walker was staunchly anti-abortion during his time in the state Legislature, leading attempts to gut family planning funding and to allow pharmacists to refuse to fill prescriptions for birth control, among other measures. His bid for governor was strongly backed by anti-abortion groups in the state. He also went after the Healthy Youth Act specifically on the campaign trail last year, criticizing the law because it didn’t allow schools to offer abstinence-only sex ed. At a Wisconsin Right to Life convention, Walker praised a district attorney who claimed that teachers who taught the new curriculum were promoting the “sexualization—and sexual assault—of our children” and threatened those teachers with criminal charges.

Given the ideological leanings of the people governing the state right now, the current law’s supporters “knew this would be one of the first things they went after,” says Tamara Grigsby, the Democratic assemblywoman who wrote the Healthy Youth Act. Teenagers are “having sex, whether we like it or not,” she continued. “I would hope that a responsible public policy would be to give them comprehensive and accurate information about how to protect themselves rather than pretending it’s not happening.”