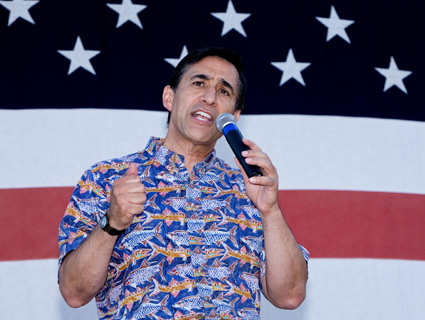 When Rep. Darrell Issa (R-Calif.) took over in January as the chairman of the House Committee on Oversight and Government Reform—the GOP’s official Obama-administration watchdog—he pledged to root out $200 billion in government waste and crack down on corruption. On Thursday, Issa was making good on that pledge—sort of—by holding a marathon, three-hour hearing entitled, “HHS and the Catholic Church: Examining the Politicization of Grants.“

The supposed goal of the hearing was to get to the bottom of whether Obama’s Health and Human Services department had discriminated against Catholics when it refused to give a contract to the US Conference of Catholic Bishops (USCCB) to assist victims of human trafficking. But the hearing and accompanying investigation were actually about abortion—and even more about beating up on the Obama administration on behalf of the religious right.

The grant Issa and his GOP colleagues are obsessing about was designed to provide emergency services to victims of human trafficking, which the bishops’ group had been doing since 2006, when the Bush administration awarded them $19 million to administer the program. As part of that contract, the USCCB subcontracted with other organizations to provide various victims’ services. But the USCCB had refused to allow the subcontractors to provide or refer victims to OB/GYN or family-planning providers. In 2009, the ACLU sued HHS over the contract, alleging that USCCB and the administration was allowing the Catholic organization to force its religious views on its clients by not denying them access to condoms, birth control pills, and other reproductive services, including abortion.

When the Bush-era grant expired, the Obama administration solicited applications for a new grant. The new request for proposals included a preference for contractors who would offer referrals to a full range of medical services, including contraceptives, family planning, and abortion. After receiving a bunch of applications from various social-service agencies, including the Catholic bishops group, reviewers at HHS ranked the applicants on their strengths and weaknesses. The bishops came in with the second-highest score. But in September, HHS shut them out and gave the grant money to three other organizations, some of which had scored significantly lower. The reason? The bishops refused to refer sex-trafficking victims to family planning or other reproductive health services.

The USCCB has been frothing about the exclusion and argued that the move amounts to anti-Catholic bias within the administration, calling it the “ABC rule,” or “Anybody But Catholics.”

Word of the administration’s diss of the bishops reached Issa, who jumped on the opportunity to launch a thorough investigation. Whistleblowers in HHS (presumably those folks who burrowed in after the Bush administration) have been sending Issa documents, which he produced at the hearing after noting that the administration had refused to provide a full accounting of the decision making behind the bishops’ grant denial. The documents do show that the bishops’ group scored well in the bidding process and that it had a pretty good track record in helping trafficking victims, even if it didn’t get them birth control pills or tubal ligations.

Issa’s punching bag for the hearing was George Sheldon, the acting assistant secretary for children and families, who’s only been on the job for six months. Issa basically accused him and HHS of having it in for the Catholics, regardless of how well they scored with the grant reviewers. “They were dead on arrival when they got here. Period. You did not tell them they had to be a shit pot better to get any award,” he virtually yelled at Sheldon.

Sheldon countered that the bishops simply refused to provide the services HHS wanted to provide in the grant. The HHS reviewers noted that was a problem. As for discriminating against Catholics, Sheldon noted, HHS under Obama had given Catholic service agencies more than $650 million in contracts—more, he suspected, than under the Bush administration.

Over the course of another three hours, Democrats spent their time explaining exactly why victims of sex trafficking might need to see an OB/GYN, and complaining that Issa had refused their requests to bring in witnesses to testify to that effect.

Several of the Catholic Democrats took umbrage at the notion that the faith was monolithic and in agreement with the USCCB. Rep. John Tierney (D-Mass.), pointing to the $650 million in HHS grants to Catholic organization, said, “A lot of people would like to be discriminated against like that.” Tierney and Issa had a heated exchange over Issa’s characterization of the administration that ended after Issa testily shot back, “I hope the gentleman is not implying that the chair is lying.”

Issa, though, was not the angriest member of the committee to take issue with Sheldon’s answers or HHS in general. That honor went to Rep. Christopher Smith (R-N.J.), who isn’t even on the oversight committee but whom Issa allowed to participate because he was the author of the Trafficking Victims Protection Act of 2000, the genesis for all of these grants. Smith looked apoplectic as he read his statement blasting the administration and accusing it of “bid rigging.”

“If you are a Catholic, or other faith-based NGO, or a secular organization of conscience, there is now clear proof that your grant application will not be considered under a fair, impartial, and transparent process by the Obama administration,” Smith thundered. “The Obama administration’s bias against Catholics is an affront to religious freedom and a threat to all people of faith. The bottom line is this: Pernicious pro-abortion favoritism, embedded in this egregiously flawed process, does a grave disservice to the victims of trafficking. Victims deserve better.”

Smith spent his time trying to eke out of Sheldon whether HHS secretary Kathleen Sebelius had meddled with the grant award. Or pro-choice groups. Or maybe the ACLU. He didn’t get any smoking-gun responses from Sheldon, who stuck to the talking points. “It’s within the law to respond to the needs of this population,” he said, looking weary after three hours at the witness table.

Other Republicans on the committee tried to learn why HHS couldn’t have found some way to give the bishops some money even if they couldn’t meet the terms of the contract, like maybe having them only serve men, for instance. Issa compared the situation of the Catholics to that of an Orthodox Jew who worked as a driver but couldn’t operate a car on Friday night. Sheldon, for his part, really didn’t have a good answer to that question other than to say that the bishops themselves hadn’t offered up any alternatives, even when they were asked to.

Finally, well into lunchtime, Issa brought the hearing to a close, pledging to hold another one on the subject soon. Whether spending hours investigating a $2 million grant award will get him anywhere near his goal of rooting out $200 billion in government waste, though, didn’t figure into the equation.